Exposing the lies of BDS

Op-ed: Many a good person has fallen for the persuasive arguments of the boycott campaign, which appears to be driven by respect for human rights. But the truth is far more nefarious.

The "Fighting the Boycott" campaign launched by Ynet's sister publication, Yedioth Ahronoth, has sparked numerous reactions and questions – some challenging and significant.

They attest to the challenges posed by the BDS movement. The questioners are not anti-Semites. A portion of the BDS supporters are falling under the spell of the movement because it purports to be tackling a real problem. Yes, the Muslims and Arabs are killing Arabs and Muslims as a matter of routine, and far more than any operation by Israel – and it's only intensifying. But the focus on Israel, some critics of the country argue, stems from the fact that Israel is a democracy. There are other questions and issues too – concerning the occupation, human rights, the settlements, the blockade, and more.

And look, says the man on the fence to himself, the occupation has been around for decades, and there's no peace and no hope. So perhaps the non-violent approach offered by the boycott campaign is in fact the right way?

BDS demonstration in Melbourne, Australia, 2010 (Photo: Reuters)
Let's try to answer some of these questions – because they represent the questions of many a good man and woman who are being sucked into the rhetoric of the BDS campaign not out of hatred for Israel or anti-Semitism, but because they truly believe in human rights, non-violence and fixing the world. They deserve answers. Perhaps the problem is the occupation and not the BDS campaign?

This appears to be the most widespread argument among those who understand, explain and justify the boycott. Omar Barghouti, a leader of the BDS campaign, was once asked: Will an end to the occupation also bring an end to the campaign? "No," he replied bluntly.

On the contrary. The initiators and leaders of the campaign are opposed to a peace settlement based on two states for two peoples. Their guiding principle is the so-called right of return, which would mean an end to Israel; and one of their main slogans reads: "From the river to the sea, Palestine will be free."

Thus, we need to find a compromise, and we need to fight for a settlement and peace – and that's exactly we also need to oppose the boycott campaign. Perhaps the BDS campaign is intensifying because Israel has rejected the peace proposals?

In early 2001, Yasser Arafat went to the White House and turned down Bill Clinton's peace proposal. In 2008, Mahmoud Abbas rejected a similar proposal from Ehud Olmert. And in March 2014, Abbas again said no – this time, to a proposal drafted by US Secretary of State John Kerry. Therefore, even if the lie about Israeli rejectionism is repeated a thousand times, it still remains a lie.

Perhaps the fact that Israel continues to build settlements is proof that it doesn't want peace?

In any event, the construction in the West Bank, for the most part, is taking place inside the existing settlement blocs, which even under Clinton's proposal will remain in Israeli hands. Justified criticism is one thing, but support for BDS is a different story altogether. 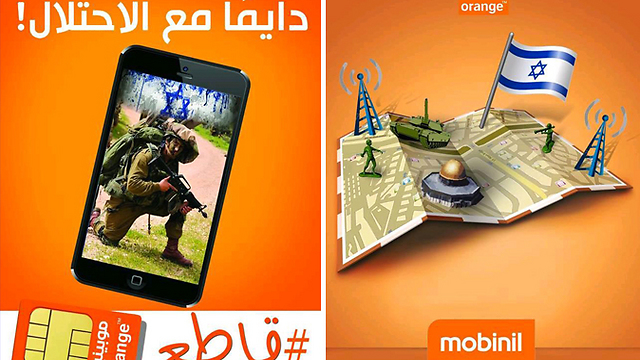 Egyptian campaign to boycott Orange for its operations beyond the Green Line
Perhaps it's worth trying the non-violent BDS approach in light of the failed diplomatic efforts and armed struggles?

A campaign led by people who deny Israel's right to exist cannot hide under a blanket of "a non-violent campaign." Negating Israel's right to exist is "politicide," political annihilation, a blatant violation of international law. We're not dealing with a fight for rights, but a fight rather to single out and deny one particular nation's right to self-determination.

International pressure is a legitimate tool. Therefore, and as unpleasant as it may be, the European Union has every right to pressure Israel vis-à-vis the settlements, to mark products and the like. But don't get things mixed up.

There's a big difference between international pressure designed to promote a peace settlement and the BDS campaign, the stated aim of which is to oppose any peace arrangement based on two states for two peoples. Just because Iran and North Korea violate human rights, does that mean Israel can do so too?

Violating human rights is unjust, regardless of the national or religious identity of the state. The problem is that while dozens of countries are involved in conflicts and human rights violations, an international campaign is being waged almost exclusively against just one country – Israel.

Hypocrisy isn't morality. Double standards aren't standards. The criticism aimed against Israel isn't criticism; it's racism. And what about the blockade on Gaza?

Israel pulled out of the Gaza Strip. It didn't want a blockade. The blockade isn't against the residents of the Strip; it's against the supreme effort on the part of Hamas to acquire weapons. A flourishing and prosperous Gaza Strip is in Israel's interests. The BDS movement and Hamas have other interests at heart.

There are many more questions; and some of the claims against Israel are indeed justified. Feel free to ask anything you like. The dialogue has just begun. To be continued.