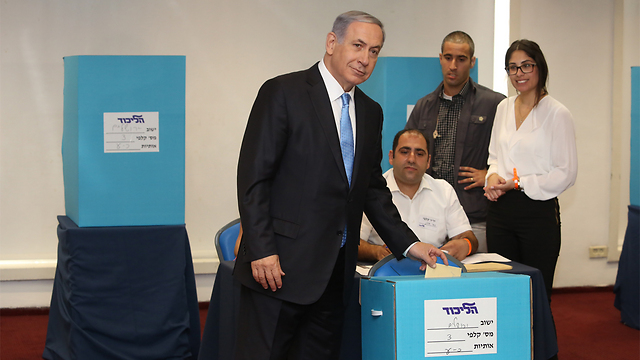 Members of the powerful Likud Central Committee decided in a vote Sunday to back Prime Minister Benjamin Netanyahu's proposal to leave the task of deciding who will sit in the Knesset to all Likud party members.

The vote count started after 69 percent of Likud's Central Committee members went to the polls across the country to decide the composition of Likud's Knesset list. Once the votes were all counted, it showed that 57.9 percent voted in favor of Netanyahu's proposal.

At 11 am, some 17 polling stations across the country were opened and about 3,700 members of the Likud Central Committee were invited to decide on the issue, out of which some 2,689 came to vote. Of the voters, 1,557 opted for Netanyahu's proposal, as opposed to 1,040 who voted in favor of MK David Amsalem's proposal to restore power to the Central Committee.

Netanyahu thanked the committee members: "The members showed responsibility, stood behind my proposal and voted in favor of the Likud and the unity of the party. We will continue to lead the country as the ruling party, strong, big and united for many years to come."

There were three proposals on the agenda. One from Netanyahu, to leave the composition of the national Likud list to all Likud members, but the selection of district representatives would be entrusted to the Central Committee members.

The third proposal, by MK David Amsalem was responsible for the broad deliberation within the Likud. His proposal was to give back all the power to the Central Committee members and have them choose the entire list. Amsalem tried to garner as much support as possible for his proposal, while Netanyahu issued harsh statements against it, arguing that it could lead to the collapse of the Likud.

Netanyahu put quite a bit of effort in the last days before the vote, and during voting day itself, to persuade the Central Committee members not to return the power into their hands exclusively but to be satisfied with the selection of district representatives to the Knesset.

MK Amsalem also tried to convince Central Committee members. Both held many conversations with members, each trying to convince their colleagues that his proposal was the best.

Even before publication of the results, Amsalem said that in his opinion victory was achieved: "The aim is not to embarrass the prime minister, it's not personal and it's not a competition between Dudi Amsalem and Benjamin Netanyahu. This is a vote on procedure and the future of the party in the coming years. The Likud is a party of the people and the present system has distanced us, to a certain extent, from the field."

"Returning influence to the central committee would increase voters and would make the branches livelier. I repeat and stress that the fact that we managed to have the elections held today is the great achievement. To see members and their involvement is the great victory of the Likud. I will accept any result happily, and will work to strengthen the movement in any way the members choose to. I promised them I was going with my proposal to the end and I delivered, now it's in their hands", he added.

Over the last few days, Netanyahu's aides expressed concern of low turnout which could work in favor of the counter-proposals. Netanyahu was interviewed by a Likud party website, and called on party members to get out and vote. He came the International Convention Center, and told party members that his proposal was proportional and again called on them to get out and vote.

Throughout the day the voters were asked to check the appropriate proposal on the voting forms. At exactly 10pm polling stations were closed and and the forms were manually counted.