A member of the Hitlerjugend - HJ (Hitler Youth) wearing his uniform
Photo: AP 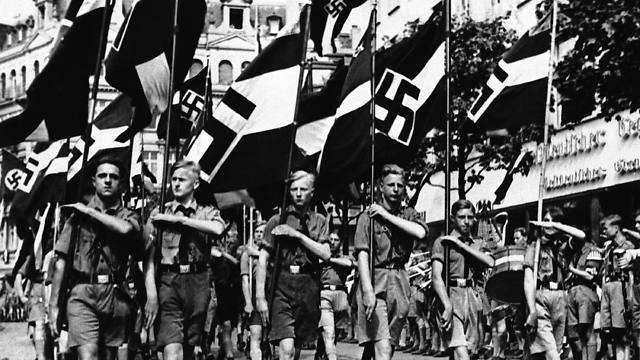 Researchers say that those schooled during Nazi period are far more likely to be anti-Semitic, even though decades have passed.

Anti-Semitic propaganda had a life-long effect on German children schooled during the Nazi period, leaving them far more likely to harbor negative views of Jews than those born earlier and later, according to a study published Monday.

The findings indicate that attempts to influence public attitudes are most effective when they target young people, particularly if the message confirms existing beliefs, the authors said.

In this Feb. 24, 1936 file photo, a group of boys march beneath Nazi standards in Berlin (Photo: AP)

Researchers from the United States and Switzerland examined surveys conducted in 1996 and 2006 that asked respondents about a range of issues, including their opinions of Jews. The polls, known as the German General Social Survey, reflected the views of 5,300 people from 264 towns and cities across Germany, allowing the researchers to examine differences according to age, gender and location.

By focusing on those respondents who expressed consistently negative views of Jews in a number of questions, the researchers found that those born in the 1930s held the most extreme anti-Semitic opinions — even decades after the end of Nazi rule.

"It's not just that Nazi schooling worked, that if you subject people to a totalitarian regime during their formative years it will influence the way their mind works," said Hans-Joachim Voth of the University of Zurich, one of the study's authors.

"The striking thing is that it doesn't go away afterward."

But members of the group, which was systematically indoctrinated by the Nazi education system during Adolf Hitler's 1933-1945 dictatorship, also showed marked differences depending on whether they came from an area where anti-Semitism was already strong before the Nazis.

For this, the researchers compared the survey with historical voting records going back to the late 1890s. They found that those from areas where anti-Semitic parties were traditionally strong also had the most negative opinions of Jews.

"The extent to which Nazi schooling worked depended crucially on whether the overall environment where children grew up was already a bit anti-Semitic," said Voth. "It tells you that indoctrination can work, it can last to a surprising extent, but the way it works has to be compatible to something people already believe."

"The significance of this kind of propaganda hasn't really been exposed," said Ortmeyer, who wasn't involved in the study. "Compared to the brutal deeds of the Nazi mass murderers this area of crimes, the brainwashing, was largely ignored."

One reason, he said, is the difficulty of getting older Germans to talk about their experiences of the Nazi period. While Jews who survived the Holocaust vividly recount the abuse they suffered in school and at the hands of fellow pupils, non-Jewish Germans mostly describe their school years as peaceful and fun.

Ortmeyer said Nazi educators wove anti-Semitic propaganda into every school subject and extra-curricular activity, even giving students "projects" that included scouring church records for the names of Jewish families that had recently converted to Christianity. These were later used to draw up lists of Jews for deportation to concentration camps, making students unwitting accomplices in the Holocaust.

There were some exceptions, said Ortmeyer, such as the 'White Rose' in Munich and the 'Edelweiss Pirates' in Cologne — youth resistance groups that formed despite the overwhelming Nazi propaganda.

"Those are important examples for young people these days," he said.

The study also noted that Germans born in the 1920s held only slightly more anti-Semitic views than those born in the '40s — even though some in the older group would have gone to school during the Nazi era, while the younger group didn't. The authors suggested that those with extreme views might not have survived the war, falling victim to their own enthusiasm for Nazi ideology.

"We can't prove it, but it seems likely to us based on the patterns in the data, that these were the cohorts that weren't drafted but by the end of the war they could volunteer for the Waffen SS. And they had an incredibly high casualty rate," said Voth.