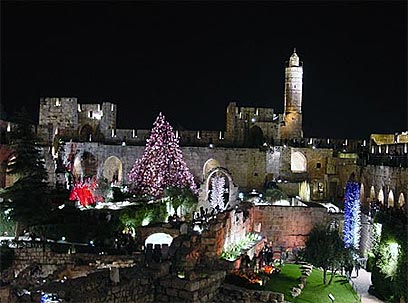 Travel website's Jewish CEO Stephen Kaufer recalls his journey to Israel with his late wife: 'It instantly turned into my favorite trip then and ever since.'

Of all of the places TripAdvisor CEO Stephen Kaufer has visited in his lifetime, one stands out as his favorite: Jerusalem.

"All of these amazing structures, the history that you could still visually appreciate from thousands of years ago with modern life going on all around it - I just thought it was magical," explained Kaufer in an interview to the Jewish Telegraphic Agency (JTA) of his 1989 trip to the Holy Land. "It instantly turned into my favorite trip then and ever since."

Though Kaufer chose Jerusalem as his favorite destination for its culture and history, the Israeli capital also resonates with Kaufer for another reason: It was the location of his honeymoon with his wife Caroline Lipson Kaufer, who died in 2005 of pancreatic neuroendocrine cancer at age 42.

Kaufer started TripAdvisor with his late wife in 2000, after trying to find a hotel for their trip to Mexico. After tiring of the repeated identical advertisements which used the same pictures and same pitches to acquire customers, Kaufer was finally able to unearth a genuine review by a couple who had actually stayed at the hotel.

Jerusalem. 'The history that you could still visually appreciate from thousands of years ago with modern life going on all around it' (Photo: Ron Peled)

So what principles guide Kaufer in his life? Tikkun Olam, the Jewish principle of making the world a better place. "We try to practice it as a family and as a company," Kaufer told JTA.

Raised Jewish in Los Angeles, Kaufer was exposed to Jewish principles by his Orthodox father through his Zionist upbringing. Though Kaufer couldn't remember the Hebrew name of the principle, Kaufer said that the Jewish principle of leaving the world a better place guides his life.

For example, Kaufer introduced a charitable initiative at TripAdvisor, where 2% of all profits would be donated to a charity chosen by TripAdvisor employees. 2013, the last year for which records are available, saw TripAdvisor donate nearly $2.7 million to charity.

Kaufer has also donated a large amount of his own personal fortune to charity, after selling his company in 2004 for $210 million.

"With TripAdvisor, it's pretty cool to have been able to affect in a positive way so many people's vacations, and to help a huge number of independent businesses that have great products or services for travelers," Kaufer said. "But it's not curing cancer."