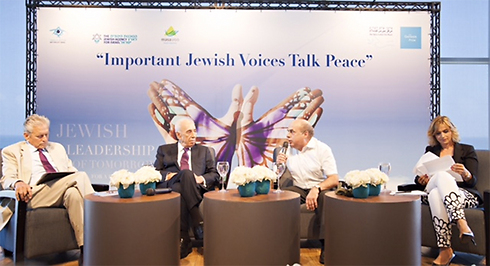 At a discussion entitled 'Jewish Voices Talk Peace,' American actor discussed BDS, the Iranian nuclear threat and why it is important for Jews to visit Israel.

Former President Shimon Peres and American actor Michael Douglas appeared on Wednesday in front of hundreds of young Jewish leaders at the Peres Center for Peace in Jaffa and addressed issues such as the attempts to boycott Israel and the Iranian nuclear threat.

In a discussion entitled "Jewish Voices Talk Peace," during an event surrounding the Genesis Prize, with the participation of Peres, Jewish Agency Chairman Natan Sharansky and Douglas, the actor said: "I am a UN ambassador for peace and I would like to say that from my experience the biggest problem in the world are nuclear weapons."

When asked by the audience what message he would convey if he could speak to the Knesset, Douglas said: "I respect the fact that I am not Israeli, but I am very concerned about the attempts of boycotting Israel and I am not comfortable with the response at the moment. I hope that the Knesset parties will overcome internal differences and work together."

On the results of Operation Protective Edge Douglas said, "I am always amazed at how many Jews are not in Israel- the most important thing is to come here and feel Israel. Everyone has his own narrative, and I encourage all of you to find your Jewish narrative and keep it in the future."

Before the event, Peres took Douglas on a private tour of the Peres Center for Peace, during which he talked to him about Israel being a start-up nation, how the military and security industries were founded and how they formed the basis of today's high-tech industry.

He also spoke of coexistence in Jaffa which reflects tolerance and mutual respect.

At the end of the event they both revealed their ages on stage - Peres 92 and Douglas 71. They both laughed when Peres called Douglas "a baby."

"You’re 70 years old, for me you are still a baby and have all the future ahead of you," Peres joked.

Peres called on young Jews to represent Israel in the world and continue to support peace: "Peace is the vision of the greatest majority of the people in Israel and most of the world supports it. Only through peace will we create two independent and free states, and we must not ignore that.

"We must negotiate with those who disagree with us to make compromises. We have to be brave and never lose hope. Whoever boycotts Israel is against peace and is sabotaging it. Do not take part in that," he added.

On Thursday night, Prime Minister Benjamin Netanyahu will award Douglas the Genesis Prize in a festive ceremony at the Jerusalem Theater.