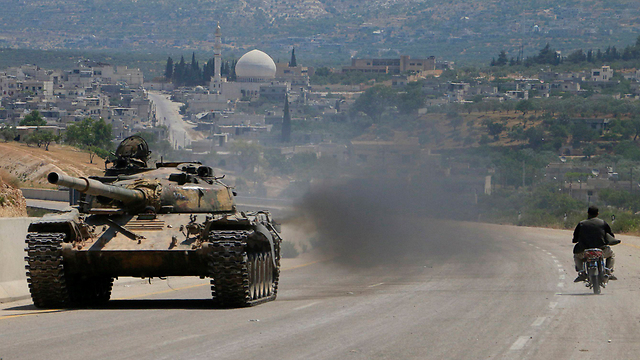 ISIS launches offensive in Raqqa province in hopes of recapturing lost ground after weeks of losses.

Islamic State fighters launched simultaneous attacks against the Syrian army and Kurdish militia overnight, moving back on the offensive after losing ground in recent days to Kurdish-led forces in the Islamist group's stronghold of Raqqa province.

In a separate offensive, rebel groups attacked Syrian government-held areas of Deraa in the south, one of the areas where insurgents have dealt President Bashar al-Assad's forces significant blows in recent months, the Syrian Observatory for Human Rights reported.

The Observatory also reported a mass departure of civilians from the town of Al-Haskah as a result of the ISIS assult. According to the reports ISIS is making large gains in recapturing the town.

Backed by US-led air strikes, the Kurdish YPG militia has driven deep into Raqqa province in the last two weeks, capturing key positions from the jihadists including Tel Abyad at the border with Turkey.

In an apparent bid to seize back the initiative, Islamic State wrested positions from the Syrian army in an assault on the northeastern city of Hasaka, while also launching an attack on the Kurdish-held town of Kobani at the Turkish border, the Observatory said.

Syrian rebels (Photo:Reuters)
Syrian state TV reported heavy clashes between Islamic State fighters and the Syrian army and allied militia in the al-Nashwa district of Hasaka, which is divided into separate zones of government and Kurdish control. The Islamic State offensive against Kobani, also known as Ayn al-Arab, started with a car bomb attack in an area near the border crossing with Turkey, the Observatory said. Islamic State fighters were battling Kurdish forces in the town itself. An official in the Kurdish YPG said Islamic State fighters were attacking the town from three sides. The Observatory said dozens of people were killed or wounded in the bombing and subsequent fighting. Kurdish forces, helped by US and allied air support, retook control of Kobani at the end of January after a four-month siege by Islamic State. In southern Syria, rebel groups attacked government-held areas of Deraa overnight, and heavy fighting and army air strikes were reported in the area, the Observatory said. Insurgents have made significant gains against the Syrian military and allied militia in the south in recent months, capturing positions including a military base, a border crossing with Jordan, and a town. The southern rebels, who include the al Qaeda-linked Nusra Front and groups that do not share its jihadist ideology, have long said they aim to expel Syrian government forces from Deraa itself. Syrian state TV said the army had repelled attacks against a number of military positions in the south of the country.