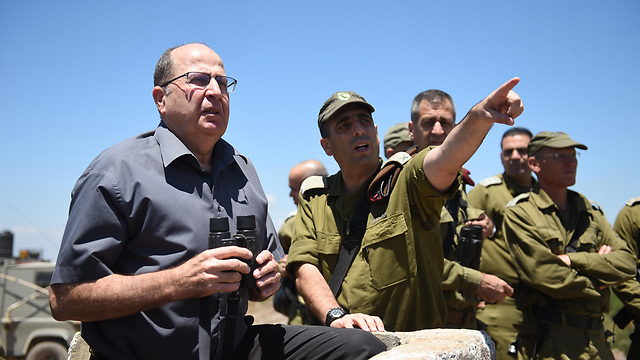 Defense minister says drive-by shooting near Shilo, shooting of Danny Gonen were both funded by Iran; in light of recent wave of attacks, IDF increases presence in West Bank.

Defense Minister Moshe Ya'alon said Tuesday that the recent shooting terror attacks have been sanctioned by Hamas' international headquarters in Istanbul and funded by Iran. Meanwhile, the IDF decided to increase its presence in the West Bank in search of the perpetrators of the attacks.

According to Ya'alon, this branch of Hamas, which moved to Turkey after being expelled from Syria, was behind the terror attack on Monday night near Shilo in which four Israelis were shot, one of them later succumbing to his wounds, while driving home from a basketball game; the shooting earlier this month near Dolev which left Israeli Danny Gonen dead and his friend wounded; and a shooting at a Magen David Adom ambulance near Beit El, in which no one was hurt.

All of these shootings happened in the same area of the West Bank - the Binyamin Regional Council - which bolsters the suspicion the same terror cell was involved.

The defense minister also said the attacks were fueled by incitement in the Palestinian Authority's official media.

Ya'alon in a tour of the Golan Heights (Photo: Defense Ministry)
"People are sitting at home during the holiday (Ramadan), watching TV, and go out to do things," Ya'alon told reporters during a briefing on Tuesday afternoon. He added that in light of the recent wave of attacks, including the stabbing of a female IDF soldier by a Palestinian woman during security check at the Rachel crossing on Monday morning, women will no longer be allowed to freely enter the Temple Mount and the age of men allowed to freely enter will change to 50 and older.

The IDF decided on Tuesday to reinforce its presence in the West Bank with an additional infantry battalion from the Nahal Brigade as a result of the recent spike in terror attacks in the area. The battalion will deal with defensive operations.

A high ranking official in the IDF said, "There is no collective punishment to the Palestinian population, and the steps that have been taken are a direct result of the current situation assessment and intelligence picture."

"The moment we get our hands on the perpetrators of the recent attacks we believe that the attacks will stop," he added. "The coordination with the Palestinian security forces continues as do the conversations with the settlers."

During a meeting with Italian Foreign Minister Paolo Gentiloni on Tuesday, President Reuven Rivlin said: "This month of Ramadan is turning into a month of terror before our very eyes. Terror is terror, wherever it strikes in the land of Israel, and across the world." He called on the Palestinian leadership to condemn the attacks and act against them. "Their silence is louder than ever. These terrorist attacks will not succeed. The Jewish people will continue to live in the land of Israel without being forced to fear for their lives. I pray for the recovery of the wounded and trust the security services will bring those responsible to justice."