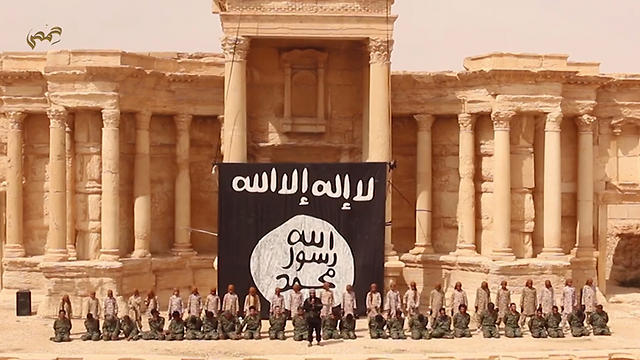 Op-ed: Serious leaders like al-Sisi, Jimmy Carter and John Kerry foolishly think there is a connection between jihadist attack worldwide and the Palestinian problem. It used to be 'look at the Jews for blame,' now it's 'look at Israel for blame'.

Unlike the leaders of other Arab countries, Egypt's president has no delusions with regards to Islam. Several months ago, al-Sisi chose to make a dramatic speech about Islam in the most important religious institute: Al-Azhar University.

He firmly asserted that there is a problem with the direction Islam is being carried in, and called for a revolution from within. Here is a leader who doesn't suffer from blindness. But even the Egyptian president still has a problem in one area. Al-Sisi met with a delegation from the American-Jewish Committee. According to reports in the Egyptian press, he told them that "resolving the Palestinian problem will eliminate one of the main reasons for joining terror organizations."

That same day jihadists murdered, among others, 44 people in Nigeria and 14 others in Kenya. In the first 19 days of Ramadan, 1,899 people were murdered by jihadists, an average of close to a 100 per day. None of them had anything to do with the Palestinian problem.

The problem is that this thesis, on the connection between the Palestinian problem and Jihad, is quite common among "progressive" circles. Jimmy Carter, for example, claimed shortly after the murder in Charlie Hebdo that "one of the origins for it is the Palestinian problem." It used to be "look at the Jews for blame," now it's "look at Israel for blame."

This nonsense is also plaguing us. As I write these lines, there is a conversation on Army Radio about the arrest of Bedouin teachers caught spreading ISIS dogma. Most of the conversation revolved around the distress the Bedouin suffer under Israeli rule, which leads them, the poor things, to support jihad. When this is what is being broadcast on Army Radio, how can we judge Carter?

John Kerry also raised a similar claim in the past. The jihadists, according to this foolish theory, are actually activists. Why is it, damn it, that there are no Kurdish terror attacks across the world, despite dozens of years of Turkish oppression? And why is it that there are no attacks done by poor Africans across the world, despite the poverty and oppression prevalent in Africa, and despite the fact the poor in Africa can only dream of being in the Palestinians' situation? And why it is that it's only Islam that manufactures this terrorism? And mostly, why is it that common sense and facts elude people who are supposed to be serious? And why is it that they always find excuses to understand and explain, and sometimes even justify, terrorism? Not everyone suffers from blindness. The editor of Asharq Al-Awsat, Eyad Abu Shakra, published a piercing article following the wave of terror on Black Friday two weeks ago. For a change, there wasn't a shred of self-deception in the article. Not poverty, not distress, not the occupation and not Israel. He points his accusatory finger at "real Islam" texts. That is the source of the murderous jihad, he wrote bravely. And in order to stop this disease, we must not cover up the problem. How fortunate it is that he didn't listen to Carter, or Army Radio.