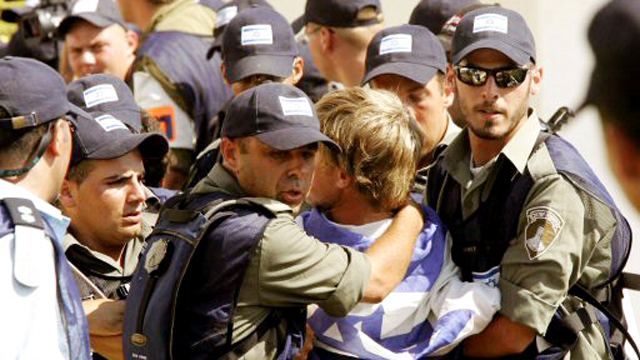 Palestinians are not exempt from blame over failure of peace talks

Op-ed: Woe on us if we are doomed with a binational state. The need to separate from the Palestinians remains, and while the disengagement from Gaza was the right idea, it was horribly executed. We need to give the PA more authorities, but keep security control over Judea and Samaria.

Several decades ago, when France marked 200 years since the French Revolution, a Chinese leader was asked for his opinion about the revolution. "It's a bit early to say," he answered. One decade has passed since the Gaza disengagement, and we already know. These are days of self-examination. The results prove that those who opposed the move were right. There were those who claimed back then, and this statement has been attributed to A.B. Yehoshua as well, that the disengagement would give Israel the legitimacy to defend itself, and mercilessly bomb the Gaza Strip. The years have passed, and it turns out it was actually disengagement’s supporters that are the first to jump at the opportunity to call any Israeli attempt to defend itself a war crime. Those who opposed the disengagement were right, but a situation in which a Jewish minority - whether in Gaza or in Judea and Samaria - lives within an Arab majority, is doomed to fail. The alternative for the disengagement, both then and now, could be one big state. Not democratic nor Jewish, but binational. So they had the right idea, but the execution was a disaster.

The disengagment (Photo:AFP)
There are no easy solutions. If another disengagement means Hamas would take over Judea and Samaria - then the current situation is better. This chance exists. It's not a slim one. Islamic extremism is rearing its head in every corner of the Muslim world. It's a delusion to think that it won’t happen in Judea and Samaria as well. But woe on us if we are doomed with the curse of a binational state.

The need for a demographic separation, to two peoples, remains. The Clinton Parameters, with the addition of security assurances in light of the strengthening of Islamic jihad, could be the right solution. It might also be possible to reach an agreement with the international community on a provisional accord, until the Palestinians deign to accept it. At the same time, there's a need for a unilateral move. An interim medicine for a chronic illness until a permanent solution is found.

You could call it a third option: Separation, but not disengagement. This means transferring more and more powers to the Palestinian Authority, easing more restrictions on the Palestinians, curbing the settlement enterprise, while at the same time maintaining security control. Without an Israeli initiative, the international pressure would only grow. The European Union is already sending us signals. And even more than just signals. So it's time to act, this is in our national interest.

The division between left and right has become less and less relevant over the years. There used to be a "Peace Camp." Now there are rights organizations, some of which are busy looking for any shred of evidence to prove Israel is committing crimes all the time. Others promote the claim Israel is to blame for the failure of the peace process. In recent years, Tzipi Livni was at the center of two rounds of peace talks with the Palestinians, under Olmert and Netanyahu's auspices. She knows what is going on there. She even dared to point an accusatory finger at Mahmoud Abbas, saying that at the moment of truth he got "cold feet." It turns out that laying the blame for the failure also on Abbas is the problem. Why is Israeli support for peace on the decline? Because of "the endless inane campaigns of people like Ben-Dror Yemini, Dan Meridor and Tzipi Livni," Raviv Drucker claimed this week. The facts remains that the Palestinians rejected generous peace initiatives over and over again. They rejected Clinton's initiative at the end of 2000, Olmert's initiative in 2008, and even the draft Kerry and Obama presented in March 2014. Livni's great crime, maybe also Meridor's and that of yours truly, is the fact we dare claim the Palestinians are not children, and certainly not retarded. They can be held responsible. Yes, even them. This isn't a "campaign." These are the facts.

Mahmoud Abbas(Photo:AP)
It turns out, lo and behold, that in his rare flashes of truth-telling, this is what Drucker himself has claimed. He wrote in the past about Clinton’s proposal that Israel said yes, and that "the Palestinians admitted to saying no." And about the Obama administration's proposal from March 2014, the very same Drucker wrote an article titled "Obama's secret proposal to Abbas," which was based on the Clinton Parameters. "The Americans were hoping," Druckman wrote, "that to this, Abbas can't say 'no.' The Palestinian leader let them down." So what exactly is the problem with Livni's claim of "cold feet"? Has Present-Drucker forgotten so quickly what Past-Drucker wrote? And it only gets worse. It's not only that Livni-Meridor-Yemini are to blame for a campaign that reduces support for peace, but he claims that terrorism promotes support for peace as well. The height of support for the Clinton Parameters, Drucker claimed, was in March 2002, which was "the most difficult, bloody month, during which the suicide bombings at the Park Hotel and Matza restaurant occurred." Drucker is promoting the belief that Israelis can only understand force. Terrorism works. This claim seemed inexplicable to me. Kalman Gayer, Ariel Sharon's strategic consultant, showed me some polls. Well, in March 12-14, 2002, support for the Clinton Parameters was at 78.9 percent. An all-time record. The suicide bombing at the Park Hotel happened on March 27, and the suicide bombing at the Matza restaurant happened on March 31. In a poll conducted on April 9-10, after the attacks, support dropped to 68 percent. Objection, meanwhile, rose from 12.2 percent to 25.7 percent. Meaning, terrorism hurt support for the proposal. Drucker wasn't merely manipulating the facts, he was shamelessly distorting them. There are too many in the "Peace Camp" of yesteryears who are too loud, like Drucker, who think you need to exempt the Palestinians of responsibility and lay the blame on Israel, only on Israel, and even justify terrorism. To do that, they give themselves the permission to lie incessantly. Those who support terrorism and violence, and oppose Abbas, are reading his comments while rubbing their hands with glee. They have Druckers, they don't need a propaganda department. David Cameron, the prime minister of Britain, gave a canonical speech this week about a five-year-plan to tackle Islamic extremism, and said this was the "struggle of our generation." He gave up on trying to be politically correct and spoke not only about those who support terrorism, but also of those who present themselves as opposing violence, but promote radicalization. For example, those who promote theories of a Jewish conspiracy or claim that the cooperation between Israel and the West is meant to humiliate Muslims. "We’ve got to show that if you say that 'violence in London isn't justified, but suicide bombs in Israel are a different matter' – then you too are part of the problem," Cameron said. Bravo.

Palestinain rioters (Photo:EPA)
The speech, as expected, led to harsh criticism from the Forces of Progress. They are used to blame the West, Israel, Zionists, for all of the world’s ills created by political Islam. So who is Cameron to ruin their thesis? Hundreds of academics signed a letter opposing the measures the British government decided on as part of their battle against terror. They claimed, of course, that the problem wasn't Islamic ideology, but discrimination and alienation. And what difference does it make that a large portion of the radicalizers are students, doctors, engineers? A poll published after the terror attack against the French satire magazine Charlie Hebro showed that 27 percent of Muslims in Britain empathized with the killers. And what difference does it make that Indian immigrants that came to Britain, despite the color of their skin and the discrimination against them - and such discrimination exists - were not radicalized, and did not respond with an explosive belt? But facts can never confuse the Forces of Progress. Not in Britain, nor in Israel. There is no need for a majority of supporters of violence to create the atmosphere of terror and violence. "A handful" of Beitar Jerusalem fans have turned into a national problem. It is possible that there were Belgians who angered them with anti-Semitic jeers. Does it justify their hooligan rioting? The hooligans already had the firecrackers when they entered the stadium. They planned on using them, regardless of the jeers. Cameron realizes there is a problem in Britain. It's time Netanyahu realizes there's a problem in Israel as well. And don't let anyone tell you that these fans were neglected, discriminated against and alienated, the poor things, and that's why they are racist and violent. It's not true in London, and it's not true in Jerusalem.