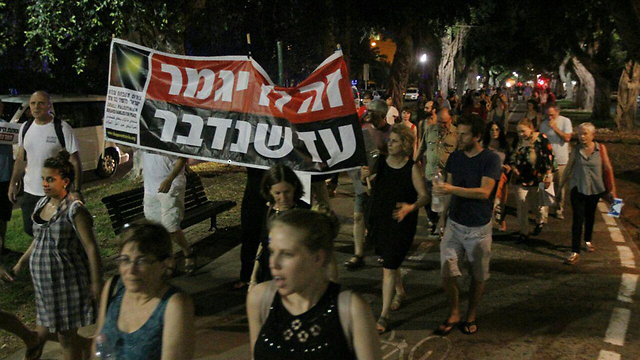 Op-ed: The two hate crimes which shocked Israelis over the weekend drew condemnations from all parts of the political spectrum, but it's unlikely there will be any action to prevent the next attacks.

The two hate crimes which shocked Israelis over the weekend allegedly created a rare consensus: Everyone, from the president and the prime minister to the very end of the opposition, condemned these crimes with the harshest words they could find.

They all promised they would not rest and would not keep quiet until the criminals were punished and the crimes stopped. They all rushed to comfort the wounded, from the Sheba Medical Center at Tel Hashomer, where the family hurt in the arson in the village of Duma was brought to, to the Hadassah Medical Center, where the young people wounded in the Jerusalem Pride Parade were cared for.

So what have we done? Almost nothing.

I attended the two demonstrations on Saturday evening, the Peace Now rally at Rabin Square and the LGBT community's rally at Meir Park. The crowd – several thousand at Rabin Square, some of whom joined the thousands at Meir Park – was the classic crowd of Tel Aviv: Many young people, many elderly people and a few from the middle generation.

More than rage, there was depression, desperation and frustration at the protests. When Saleh Dawabsheh, the murdered baby's uncle, spoke from the stage about the terror attack which destroyed his brother's family, some people shed tears. The political messages drowned in the tears.

The LGBT community has its own demands. It wants recognition, budgets and law amendments. It expects to receive them from a coalition based on homophobic parties and Knesset members. This contradiction is very hard to settle. As Minister Steinitz got on the stage at the rally, he was booed by the crowd. The protest wasn’t personally against him, but against the makeup and the policy of the government he is a member of. In this case, the protest was completely justified. He handled it well.

Before the rally, Steinitz added his signature to a document supporting the community's demands. Others, including Knesset Member Yinon Magal (Bayit Yehudi), who wanted to speak but refused to sign the document, were asked to stay home. Lapid, who has been vigorously courting rabbis recently, was received with a mixture of boos and applause. He couldn't have expected a different reception.

In many senses, the LGBT community is a success story. The hundreds of teenage girls and boys wearing the red shirts of a proud youth at Saturday evening's rally are living proof of that; the wide-scale participation of members of the different youth movements is further proof.

It seems that in today's Israeli society it's easier and nicer to proudly carry the symbols of the LGBT community than to proudly carry the left-wing slogans. It would be interesting to examine this option over time. That doesn’t mean, of course, that it's safer to be gay than to be leftist. Pride is one thing and security is another.

The question is what can be done beyond the tears. A realistic examination of the two incidents doesn’t take us much further. The stabbing at the Jerusalem Pride Parade was carried out by one person. He says he was sent by God – not by an organization or a rabbi. On the surface, the fact that the police could have arrested him so easily is shocking. But because of that, it is actually difficult to draw conclusions.

The terror attack at Duma could also be revealed as an act carried out by an isolated gang, which also received its orders from God and only from him.

Nonetheless, we can't settle for promises to catch and punish the culprits. It's a much wider, much deeper story. The swamp is the story, not just the predators swarming in it. When it comes to terror against Palestinians, the Shin Bet and police's ongoing failure stems from the commander's spirit. The criminals are protected by their yeshivot, rabbis and communities. The message to the entire sector is that violence pays off. In many cases, the State funds the criminals – directly or indirectly.

The truth is inconvenient, but we must admit it: The lower courts, which right-wing culprits are brought to, are filled with judges who show understanding towards these criminals. A series of justice ministers have made certain to prefer candidates from this sector as judges. This process was reinforced by the current government, in which the justice minister and head of the Judicial Selection Committee is Ayelet Shaked (Bayit Yehudi) and the opposition's representative in the committee is a member of the nationalistic right. Shaked is an honest and decent politician, in her own way, but that's her job.

Herzog suggested in his two speeches to declare a series of organizations, from Lehava (which opposes the assimilation of Jews) and La Familia (Beitar Jerusalem's soccer supporters' group), as terror organizations. That won't happen, not in this government.

The incitement against gay people by ultra-orthodox MKs, in their social networks and in their media outlets, won't stop either. We are all rightfully praising the haredi website which thought of interviewing terrorist Yishai Shlissel – something the police didn't think of doing. But we are avoiding asking why haredi websites have turned Shlissel into a hero, an icon.