Israeli athletes at the Special Olympics 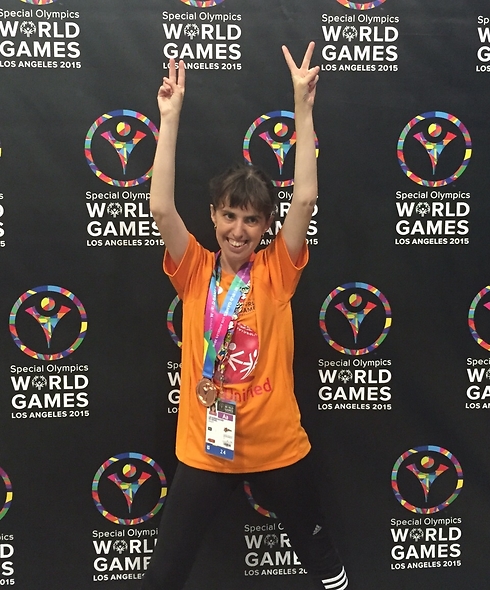 The Israeli delegation to the Special Olympics World Games in Los Angeles will return to Israel on Tuesday with a bundle of 61 medals – 25 gold, 18 silver and 18 bronze. Israel is one of 177 countries who sent athletes to compete in the Special Olympics, but got a particular honor when Eliyahu Somer, a basketball player, was one of seven who were chosen to carry the Olympic torch during the opening ceremony of the competition.

Lin Kornhauser at the Special Olympics

Unlike most competitions in which Iranian athletes traditionally boycott meetings with Israelis, in the World Games the relationship between the delegations were warm, and members of the Iranian delegation took photographs with the Israeli delegation during the competitions and spoke at length about the political situation between the two countries.

The games are held in accordance with the level of the participant through a division into different levels of capability, so as to meet the different needs of every individual participant or sport team. As a result, the athletes compete against those who have the same level of ability professionally (and not mentally)

Israel's wheelchair basketball team came in first place in the tournament and brought home the gold after defeating the Czech Republic 69:60, Austria 68:59 and Latvia 64:31. Roi Rosenberg, Lior Dror and Alon Dor-On all scored many points.

They will participate in the European Wheelchair Basketball Championships, which will take place from August 28 to September 6 in Worcester, UK.

Israel is in group B and and will play against the Netherlands, Turkey, Switzerland, Sweden and Italy. The Group A teams are Britain, Poland, Spain, Czech Republic, Germany and France.

The five teams who rank first in the championships teams will ensure their place in the Paralympics to be held next year in Rio de Janeiro, Brazil.

Lea Schneider contributed to this report.