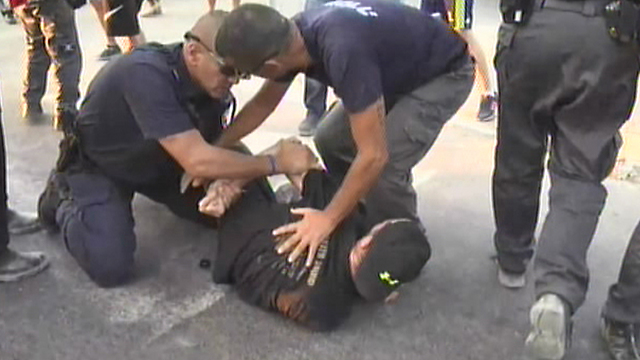 Arab and Jewish protesters clashed on Wednesday evening outside the Barzilai Medical Center in Ashkelon, where Palestinian hunger-striker prisoner Mohammed Allaan is hospitalized.

Some 200 Arab lawyers held a protest rally outside the hospital in solidarity with Allaan, who has been on hunger strike for 59 days. The protesters were joined by Arab MKs.

Dozens of right-wing activists staged a courter-protest, waving Israeli flags and yelling racist jeers at the Arab protesters, including "Death to Arabs," "Muhammad is a pig," "Go to Syria," "ISIS should behead you."

Photo: Roee Idan
A physical altercation broke out at the end of the protest, which also including stone-throwing.

Large police forces that arrived at the scene tried to separate the two sides using water cannons, but the confrontation continued and two people were arrested after they allegedly threw stones and other objects.

The Arab protesters, who held signs saying "Hunger strikes - legitimate protest," "Force-feeding is illegal" and "Free the prisoner," said they refused to leave.

The Arab lawyers protesting outside the hospital.

The protesters said this demonstration was only the first of many to come. "We won't keep quiet and the racists won't deter us. It is our right as residents of this country to express our opinion against any move made by the State of Israel which we consider to be illegal. The security prisoner must be freed, and administrative detentions must be stopped."

"We came to protest against the force-feeding of our friend attorney Allaan who is on a hunger strike. We received permits for the protest, but it was the protesters on the other side that didn't receive a permit and rioted," attorney Mohammed Amin Tibi told Ynet. "We're lawyers, we upheld the law and maintained restraint - but they broke all the rules."

Even doctors in Barzilai, to where Allaan was transferred this week from the Soroka Medical Center in Be'er Sheva, have expressed strong opposition to force-feeding.

It remains unclear whether Allaan will become the first Palestinian to be force-fed in accordance with legislation approved in the Knesset last week with a majority of 46 supporters and 40 against. According to the new law, the state would be empowered to force-feed hunger-striking prisoners whose lives are in danger, even if they don't agree to it.

Force-feeding is usually carried out in two ways: Inserting food using a feeding tube directly into the stomach. Another way, which is rarely used, is feeding through the arteries - inserting a feeding tube into the aorta or an artery in the groin.

Allaan, of a West Bank village of Einabus, has been detained since November last year on suspicion of involvement in Islamic Jihad terror activity and other charges that, according to his lawyer, are unknown to him.