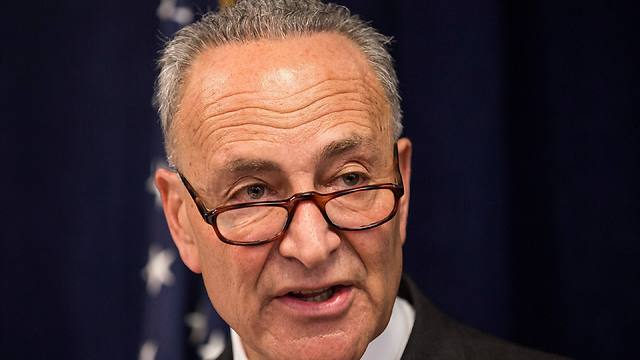 The Democratic Party’s betrayal of its Jewish voters

Op-ed: Democrats have turned their back on Jews by committing to a nuclear deal with Iran which puts Jewish state at risk, and voters need to take action.

Back in 1992, the traditional Republican Party stance was expressed when James Baker, at the time Secretary of State to President George H. W. Bush, said "F*** the Jews. They didn’t vote for us anyway." It seems these days that the Democratic Party’s words and their actions reveal their new mantra and stance about their Jewish voters: F*** the Jews, they are voting for us anyway.

While the Republicans in the US Senate and House of Representatives are almost unanimously voting against the Iran nuclear deal, only two Democratic senators, Senator Schumer and Senator Menendez, have decided to vote against it, while 14 other Democratic senators have come out supporting the deal, including Kirsten Gillibrand from New York and Bill Nelson from Florida. Those Senators are doing so in spite of their states having very large and active Jewish constituents.

All is Fair in War
On the edge of the abyss
Nahum Barnea
Analysis: Israel is willing to do anything to thwart the nuclear deal, including publicly threatening Iranian scientists, interfering with the internal affairs of the US, and dividing US Jews; meanwhile, Netanyahu's mistaken 2002 assessment of Iraq is coming back to haunt him in his battle against Tehran.
On the edge of the abyss

But much worse, the Democratic Party and its representatives have been silent while President Obama and his supporters in the White house, progressive groups, and the liberal media, are personally and publicly singling out and attacking US Jewish organizations, Congressmen, the Jewish state, and its prime minister, for opposing the deal with Iran. The accusations that are being made are reminiscent of classic anti-Semitic stereotypes. similar to what is found on any anti-Semitic website. Jewish voters will hold the Democratic Party responsible if Jewish history repeats itself and this rhetoric feeds anti-Semitic acts and leads to violence.

The Democratic Party should understand that this time around, they are making a huge political mistake in underestimating the importance of this issue to most Democratic Jewish voters, and the Jewish outrage regarding the sales tactics that the Obama administration and its supporters have been using in order to win.

Generally, Jews in the US are divided on many issues, but this deal is so bad that most US Jews are united in their opposition to the deal, the exception being marginal leftist groups such as J Street, which is the only Jewish group Obama feels affinity to. To really know what the Jewish voters think, one should pay attention to the major Jewish organizations’ stance on the issue. Virtually all Jewish organizations which are at the center or center-left of the US political spectrum and contain large numbers of Democrats are opposing, or at the very least concerned about, the deal.

In addition, most Jews in Israel along the entire political spectrum are united against the deal, and 74 percent stated in a recent poll that they wish Israel to fight the deal in Congress. It is not surprising that AIPAC could spend $25 million lobbying against the deal, while J Street can spend only $2 million. Major Jewish donors to the Democratic Party like Haim Saban and Jack Rosen have publicly come out against the deal, calling it a very bad one, and all Jewish representatives from New York are against the deal.

It seems that the Democrats do not understand that Israel’s survival and security is an important Jewish issue and interest, like Africa, and Apartheid in South Africa, are important issues for African-Americans, and illegal emigration from Central and South America is an important issue for the Hispanic voters. In an American Jewish Committee poll in 2013, 70 percent of American Jews agreed strongly or somewhat agreed with the statement: "Caring about Israel is a very important part of my being a Jew."

But much worse, the Democratic Party does not seem to accept the fact that Jews, including Jewish Senators and Congressmen, as well as Jewish organizations, have the right to disagree with the President and the leader of the Democratic Party like any other American without being viscously attacked as warmongers, agents of a foreign power, accused of selling their votes to shadowy lobbyists, and being dual loyalists, as well as being accused of acting contrary to the best interests of the United States for the sake of Israeli interests.

The editors of the American Jewish magazine Tablet wrote about this troubling development in its editorial titled "Crossing a Line To Sell a Deal," saying: "This use of anti-Jewish incitement as a political tool is a sickening new development in American political discourse, and we have heard too much of it lately—some coming, ominously, from our own White House and its representatives. Let’s not mince words: Murmuring about 'money' and 'lobbying' and 'foreign interests' who seek to drag America into war is a direct attempt to play the dual-loyalty card. It’s the kind of dark, nasty stuff we might expect to hear at a white power rally, not from the President of the United States—and it’s gotten so blatant that even many of us who are generally sympathetic to the administration, and even this deal, have been shaken by it."

When Republican presidential candidate and well known Israel supporter Mike Huckabee criticized the Iran deal and said that President Obama will ultimately “take the Israelis and march them to the door of the oven”, many in the Democratic Party and the liberal media were outraged. The National Jewish Democratic Council immediately denounced the remarks as “not only disgustingly offensive to the President and the White House, but shows utter, callous disregard for the millions of lives lost in the Shoah (Holocaust) and to the pain still felt by their descendants today.” Where is the Democratic Party’s outrage towards their own leader and their followers?

Despite the fact that Jews make up only two percent of the American electorate, their importance is not only in their votes. They account for a huge share of the activist base of the Democratic Party and account for much of the money available to Democratic candidates. Based on their betrayal of silence and indifference to Jewish concerns, the Democratic Party needs to pay dearly in the next few elections.

Jewish Democrats must abandon the Democratic Party, as they have arrogantly abandoned Jewish voters and the Jewish State when it mattered most.

Shoula Romano Horing is an attorney. Her blog can be found here: www.shoularomnohoring.com .