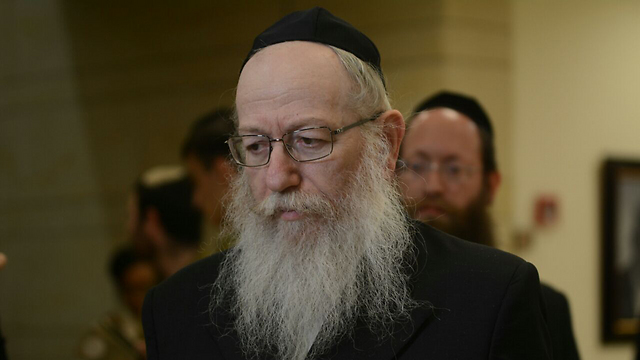 Litzman gets go ahead for health minister appointment

The Council of Torah Sages on Thursday approved the appointment of Deputy Health Minister Ya'akov Litzman (United Torah Judaism) to a ministerial post after the High Court of Justice this week ruled that Litzman must leave his current position within two months and that a full-time health minister should be appointed.

Litzman announced that he had accepted the council's decision and Prime Minister Benjamin Netanyahu's nomination as minister of health.

"I will soon act as health minister," Litzman said following the decision. "I respect the decision and the demand of the court. As far as I'm concerned, there is no change in my role. I have served and will continue to serve the citizens of Israel just as I have until today."

This will mark only the second time ever that a United Torah Judaism MK will be a minister in the government.

The petition to disqualify the deputy health minister from his role was submitted by Yesh Atid in May.

After that, the government formulated an outline of the division of labor between the minister and his deputy, but the petition claimed the outline was nothing but a sham.

The High Court's ruling was partial, with the second part of the petition dealing with the option of the prime minister simultaneously acting as a minister. The current prime minister also serves as Foreign Minister, Health Minister, Communications Minister, and Regional Cooperation Minister.

But the Health Ministry shakeup wasn't the only government change to take place Thursday.

Prime Minister Benjamin Netanyahu announced that Likud MK Ofir Akunis would be posted as Science, Technology and Space Minister, switching out Danny Danon who is taking up the post of ambassador to the UN.

Akunis will take up his new job in addition to his current duties as a minister without portfolio, responsible for Israel's Broadcasting Authority.