New hasbara booklet for kids: 'There's no such thing as Palestine'

With illustrated booklet titled 'Occupation Shmuccupation,' Yesha Council teaches its dogma to settler children at young age; 'it's important to us that the younger generation knows the right facts and doesn't rely on stigmas left-wing organizations are trying to disseminate.'

The Yesha Council has published a new booklet titled "Occupation Shmuccupation," starting to teach its dogma to children living in the West Bank at a younger age.

The illustrated booklet is filled with messages such as: "There is no such thing as the State of Palestine," "vandalizing Palestinian property is a criminal offense - but sometimes Arabs do it to other Arabs," "there is no solution to the Israeli-Palestinian conflict," and more.

The booklet will be distributed in community centers, universities across the country and among professionals working with teenagers. The council is also considering distributing the booklets in kindergartens, schools, and youth groups in order to reach all of the children in the area. 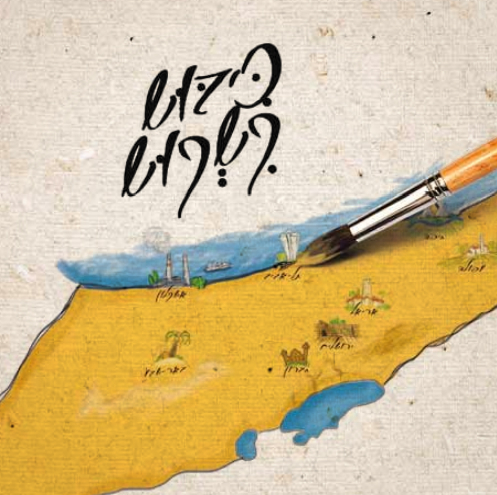 The booklet's cover: 'Occupation Shmuccupation' (Illustration: Shlomi Charka)
The production of the booklet has been long in the making, and it was released at the beginning of the school year. The booklet includes data on different settlements in the West Bank, discusses "price tag" attacks, and explains what policy needs to be taken about the conflict. Next to each message, there is an illustration done by Shlomi Charka, meant to help explain it to the child or teenager. 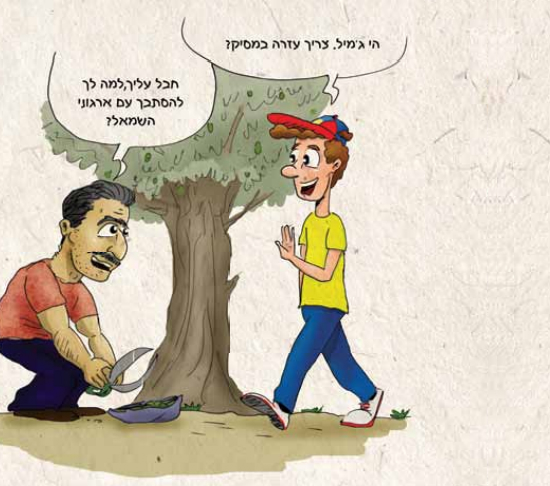 Illustration from the book: 'Hey Jamil, need help with the olive harvest?' - 'Don't bother, why get in trouble with the left-wing organizations? (Illustration: Shlomi Charka)
Among other things, one of the pages states that quite a few world leaders tried to solve the Israeli-Palestinian conflict, but despite the Israelis' strong desire to reach peace, it did not happen. For that reason, the booklet's authors assert, Israel should invest in managing the conflict rather than solving it.

Another page talks about the recent series of grave "price tag" attacks against Arabs. The booklet states that a small, radical and criminal minority sometimes vandalizes olive trees and Arabs' property, but often the damage is caused as a result of "internal conflicts between the Arabs over land." 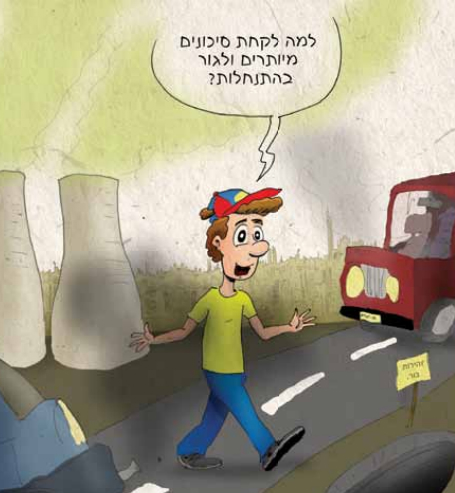 Illustration from the book: 'Why take unnecessary risk and live in the settlements?' (Illustration: Shlomi Charka)
With regards to a Palestinian state, the booklet has a firm stance: "There has never been a state called Palestine. This mistake originates from the name given to the land of Israel when the Greek ruled over it, 'Palestina.' Meanwhile, 'Palestinians' is a name for Arabs who live in Judea and Samaria, who are different than Arabs living inside Israel, who are Israeli citizens for all intents and purposes." Yesha Council spokesman Yigal Dakmoni explained that the booklet is being distributed in order to give young Israelis in the area tools against left-wing organizations. "We're looking at the future generation. Our generation won't achieve calm with the Palestinians, so it's important to us that the younger generation knows the right facts and doesn't rely on stigmas left-wing organizations are trying to disseminate," he said.