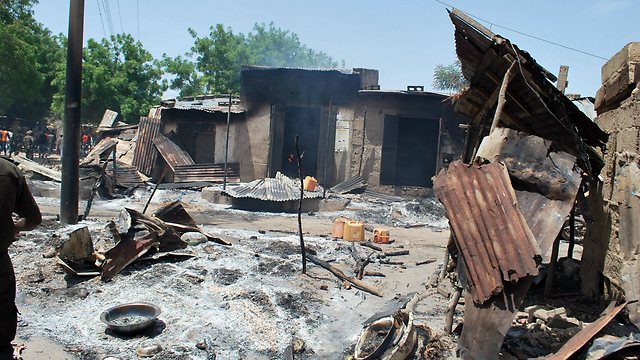 The treachery of the free world

Half a million children became refugees in the last five months, more than a 100,000 children a month.

The attention of the international community is not focused on them. A very small minority of newspapers mentions them.

It is not clear how many of them have died from disease. They have joined around 900,000 children from the same area who became refugees before them.

In total, 1.4 million children, according to a new UNESCO report, are living in hellish conditions. And there is no crying and no wailing and no international commotion and no demonstrations in Munich or Paris or London or San Francisco, not for or against them. They simply don't take exist.

But they do exist. Children of flesh and blood. They are victims of the fear sown by the terrorist organization Boko Haram.

Yes, it's another branch of jihad. And these suffering children, most of them younger than five, are fleeing conflict-hit areas in Chad, Cameroon, Niger and of course Nigeria. Muslims are slaughtering Muslims. And the world is silent. Who cares?

Where is the conscience of humanity? Don't go looking for it. Conscience these days is a television show. One boy, Aylan Kurdi, became an icon solely because a camera documented him washed up on the beach. Another victim of jihad.

The boy's last words, "Daddy, don't die," that he did or didn't say, the waves of the sea that deposited him on the shore – all increased the drama. There is a human story there. Millions are a statistic. But just one, with a camera in the area, is a global drama.

It's not that the world doesn't know about the millions of others. After all, parts of Africa have been in total chaos for years. We know and distance ourselves. Know and ignore. Our collective conscience is waiting for a camera. Otherwise it is not roused.

Homes in a Nigerian village, burned down by Boko Haram. Over 100,000 children become refugees every month (Photo: AFP)

One whose conscience is awakened only by a video clip is an armchair humanist. Maybe he will send his old clothes to absorption centers for refugees instead of throwing them away, but this will not change the level of suffering. And morality that does not deal with suffering, morality that is a television drama, is a manipulation of morality.

How does this affect Israel? No one cares about Palestinians and the occupation interests the world as much as last year's snow. After all, Palestinians have been languishing in refugee camps in Lebanon for decades. They suffer from apartheid in every way, from being barred from certain popular professions to building restrictions, and so on and so forth.

Even UNRWA, no lover of Israel, published a report on the shocking state of those who remain in refugee camps there. No one in the rich Arab countries cares about the state of refugees, not in the 1950s and not now. They care about one thing only: The flow of funds for disseminating Islamic education, in order to create new generations of jihad, which will create more destruction and refugees.

The free world is also unmoved by the plight of Palestinians in Lebanon, who can only dream of having the same conditions as Palestinians living under Israeli rule. Because there, in Lebanon, they are not fighting against Israel. Because there are no cameras there. Because in order to activate the conscience of hypocrites one needs a video clip in which a Palestinian girl – blonde of course, that photographs much better – biting a soldier who is showing remarkable restraint.

This girl is particularly in demand. She is on display in many Pallywood films. Every Palestinian child in Lebanon, every refugee child in refugee camps in Turkey, in Jordan, in Lebanon and of course in Africa, would sell their mother to be in her place. The last sentence is a quote from Slavoj Žižek, rock star philosopher and anti-Israel like the entire herd of Western intellectuals, who was forced to admit that that situation of Palestinians is a thousand times better than the truly wretched of this world.

The rulers of Qatar and Saudi Arabia. Both have been sponsoring Islamic radicalism for years (Photo: Reuters)
When the previous education minister, Yossi Sarid, writes that he doesn't love his country, because of the girl that bit the soldier, another display of moral manipulation is before us. Many more Palestinians were injured while he was minister. He was on the negotiation team that offered the Palestinians a state on the borders of '67. It didn't help. The years passed. The Palestinians kept refusing. But the hatred, the bitterness, the propaganda and lies overwhelmed Sarid. What are facts to him? He is concerned with cameras. Just don't call it morality or conscience or compassion. Cameras in Africa could add something to human compassion. But they don't get there. There are no video clips about the cholera that is consuming 1.4 million children. They're out of frame. The screens are busy showing B'Tselem's videos.

The hunter-photographers sit there for hours and days and weeks and months and years, the most photographers per capita in the world. They photograph everything. Here and there, once every few months, they manage to catch something. A blonde girl biting a soldier. Wow.

If those are the spoils from the flood of cameras, a single event once every few months, someone with a conscience must cry out: Is this the story? This is what you've come up with? After all, even in Denmark one can find policemen who are less restrained in front of protesters. There is nothing to say about American policemen. Indeed, Israeli soldiers, under the circumstances and the provocation, are incredibly merciful. They don't kill en masse. They don't shoot indiscriminately. They don't torture. Once every few months there are soldiers who kill, the exceptions prove the rule. And the rule is restrained and moral behavior.

Instead of despising the state, Sarid should have given the soldier a medal. But Sarid is a soldier in the army of incitement. You can count on those who pretend to worry about human rights spreading their wares around the world.

You can count on international community happily buying the goods. And the outcome is that there will be much more coverage of a blonde girl, a serial actress, than of 1.4 million children in Africa whose lives are miserable. After all they are not fighting Israel. They are victims of global jihad. And there are no cameras there.

The Israeli soldier bitten by a Palestinian girl (Photo: Reuters)
This outcome is one of the biggest frauds of international opinion. The outcome is a hate campaign against Israel. The outcome is the ignoring of the genuine suffering in the world. The responsibility belongs to "B'Tselem" and to the abundance of inciting articles. The manipulation is winning. And because of this distortion of morality millions continue to be wretched. They are the victims of global jihad, from Syria to Somalia, from Libya to Iran, from Afghanistan to Cameroon. And instead of fighting a murderous ideology, Žižek and Judith Butler and Jeremy Corbyn and the rest of the "forces of progress" concern themselves with the supply of girls and justifications and empathy for an ideology that inflicts destruction, oppression, ruin and bloodshed. They send aid packages to the terror regime of Hamas, and Noam Chomsky even rose to honor Nasrallah. All in the name of progress. And they sling mud on the only country in the world that is fighting jihad. The global left will continue to cleanse its conscience with boycotts and demonstrations against Israel. B'Tselem will continue to provide video clips in order to pour oil on the fire. Preferably with a little blonde girl, loud and cute. This is how one can distort the reality. This is how one can ignore the monster that creates millions of refugees. See you at the next demonstration against Israel, in London or San Francisco. And don't forget the Hamas and Hezbollah flags.