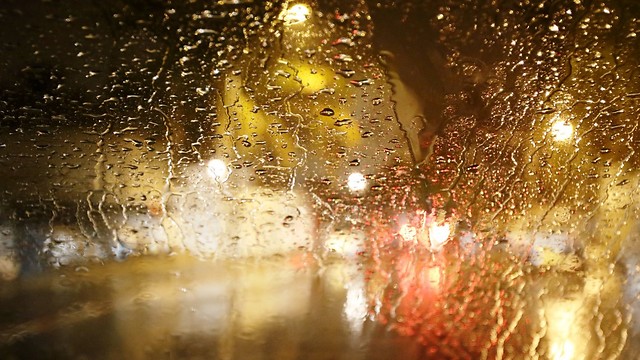 Up to 40mm of rain washed central Israel overnight, accompanied by thunderstorms and power outages. Rains are expected to continue throughout the day and into tomorrow.

We waited, and waited, and it finally came: After a long summer, the fall has arrived – and with it the first rain of the season. Rains drenched central Israel, the Negev, and other regions on Wednesday morning.

But the first rain, one of the happier occasions of the year, was compounded by several power outages which soured the joy for quite a few people. The outages were reported in Raanana, Rehovot, Ramat Gan, Petah Tikvah, Holon, and a number of neighborhoods in Tel Aviv, among other areas.

Up until midnight last night, Israel had received 0mm of rains this season, but just after 2am the skies opened up above central Israel, dousing central Israel with a fair quantity of rain. The measured quantities of rain were: 35mm in the Sharon region, 15mm in Tel Aviv, 25mm in Raanana, 40mm in Ashdod, 23mm in Ashkelon, 27mm in Gedera, and 15mm in Rishon Letzion.

Other areas in Israel which had received previous rains this season, including the Golan, Galilee, and Haifa areas also received a fair amount of precipitation overnight.

Sewage spilling into the sea after the first rain (Photo: Adam Evenhaim)

Israel Electric Corporation reported heavy congestion in its reporting system due to the outages.

"The large dust storm last month laid large amounts of dust on our power lines, and this morning when the dust met with the first rain, the lines were covered in mud," said Deputy Director Oren Helman. "The mud trickled into the system through the transformers. We usually wash the dust off, but this time we had an issue with the timeframe."

Helman emphasized that some of the problems with the grid were already repaired overnight, and that the company is working to repair additional problems. "Customers can receive an indication as to the progress of a repair through the IEC app. Customers can also report issues through the application. I believe all the outstanding issues will be dealt with shortly."