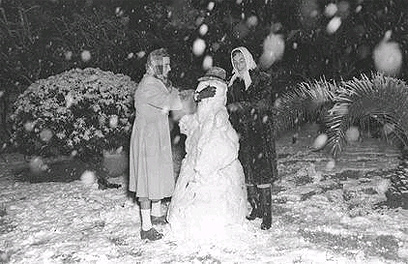 Is the Israeli summer really getting warmer? Will it ever snow in Tel Aviv again? Is global warming really responsible for the extreme weather changes we have been experiencing in the past century? An Israel Meteorological Service analysis offers some answers.

The year 2015 is coming to its end, and as we wipe the remaining beads of sweat from the heavy heat wave of the hottest August since record-keeping began, let's remember the snow storms we experienced in January and February, during a winter in which kibbutzniks from the northern Golan Heights stamped in 80 centimeters (31 inches) of snow in their backyard at a minimum temperature of minus 14 degrees Celsius (6.8 degrees Fahrenheit) - the lowest temperature recorded in Israel since records began. What is happening here? Has the weather gone mad? And was it always like this?
First Rain of the Season
Israel receives serious dose of rain
Ynet
Up to 40mm of rain wash central Israel in one night, accompanied by thunderstorms and power outages.
Israel receives its first serious dose of rain
In the past few years, it seems weather forecasters are often warning of a weather which is "unusual for this season." Meanwhile, the rise in temperatures in Israel and in the world continues. A climate change report published in March on the Israel Meteorological Service website confirms what we have been personally experiencing: As of the mid 1990s there has been a significant rise in temperatures, and the recent period appears to be the hottest. "Since 1950 to this day, and although the 1960s and 1970s were extremely hot years, it has still been hotter in the past 20 years," says Avner Furshpan, director of climatology at the Meteorological Service." "In other words, it matches the global trend."

But are these events linked? Is the global warming responsible, among other things, for the extreme weather we have been experiencing in the past few years? These questions have prompted the Meteorological Service to conduct a comprehensive review of all the extreme weather changes documented in Israel since 1920. The findings will be presented at the Annual Science and Environment Conference, which will be held in Jerusalem this week.

The review includes more than 300 events of extreme weather, including heavy snow, strong rain storms, fatal floods, drought, heat waves and more, which usually result in heavy destruction and sometimes even in deaths. It is the most comprehensive review ever conducted in Israel on this issue, and it includes weather events documented throughout nearly 100 years, starting from early 1920, when a network of weather measurement stations was deployed in Israel.

The review was authored by Dr. Noam Halfon and his colleagues from the Meteorological Service's Climate Department, who put a lot of effort into it, including browsing historical documents from the British Mandate in the Land of Israel and finding newspaper clips from the period which would support the meteorological findings, as measured in the stations.

"The team wanted to make a supreme effort in order to describe all the extreme weather events which have taken place from the earliest period," explains Furshpan. "The goal was to present the most updated and full picture of the extreme events."

No change in conclusion

Many scientists have been dealing with the link between global warming and extreme weather, but in order to discuss this issue one must ask two separate questions: First of all, is there a connection between global warming, the activity of the human race and the extreme weather events; and second, has there actually been an increase in the frequency and intensity of these events?

Many researchers have been trying to answer the first question. Dozens of them, affiliated with the Intergovernmental Panel on Climate Change (IPCC), published in 2014 a report summarizing the extreme events of 2013. According to the report, the human race's activity does raise the risk of extreme heat waves, and the anthropogenic contribution (of the human society) can be attributed to the growing intensity and frequency of the heat waves. At this stage, however, they have yet to prove a connection between man's influence and other types of extreme weather events, like drought or heavy rain.

Heat and have at the Jordan Valley, last month (Photo: Ariel Arad)

Avner Furshpan supports these findings, adding that "we must be careful not to attribute every case of extreme weather to the global warming issue. From our experience and knowledge about the Israeli climate, we know that the link does not necessarily exist, as a significant number of the serious extreme events happened in early periods, before anyone spoke about the issue of global warming and climate changes. The evidence is that the highest temperature ever measured in Israel was in 1942.

"The final conclusion hasn’t changed: We are warmer, but we have yet to prove that it matches the frequency and intensity of the extreme weather events."

Now we just have to check whether our feeling, that we are experiencing more extreme weather events, is true and based on reality.

"When analyzing the data from 1950 onwards, we still haven't found a clear increase in the frequency of extreme events," Furshpan says. So can we be relieved? Were the heat waves we experienced random rather than an ongoing trend? It may be too early for that. Furshpan warns that while the trend may not be clear, more heat waves have indeed been measured in the past few years.

The review reveals that most extreme weather events took place in the first trimester of the examined period (in other words, during the 19th century). Then, in January 1950, 10 centimeters of snow fell in Tel Aviv, in the most extensive case of snow documented in Israel.

Will we ever get to run flakes of snow in the coastal plain in our lifetime? The Tel Aviv snow in 195o was indeed unusual, but there is actually no way of knowing if it was an event of once in 100 years or 1,000 years, as it has only happened once. In interesting event which was not included in the review, and is brought to us courtesy of Furshpan, is the unprecedented heat wave which took place in late August 1881. During that period, a temperature of 44 degrees Celsius was measured at the English Hospital in Jerusalem's Old City for three days in a row, setting a Jerusalem record which has yet to be broken. Interestingly, Israel did not have many measurement stations at the time. Apart from Jerusalem, another measurement station was installed at the Sarona Templer colony in Tel Aviv, but there were no stations in hot areas like the Jordan Valley or Eilat, so it's impossible to know what were the temperatures in the rest of the country.

Despite the development of an advanced technology and the creation of improved models, the next extreme weather event cannot be forecasted. Nonetheless, Furshpan explains, estimates are that as time goes by towards the end of the century, the likelihood of heat waves will grow. We have already started feeling this trend, in light of the proximity and length of the serious heat wave. August of 2015 was the hottest month since records began, and September has now received the same title as well.

Extreme weather events usually have far-reaching consequences: Drought causes irreversible agricultural damage and a snow storm can lead to the collapse of ceilings, disrupt the transportation system and cause power outages. A good forecast of the event could save lives. Is there a way to reduce man's powerlessness in the face of the forces of nature?

A consistent documentation of the weather, as the Meteorological Service is doing, allows the creation of models which help prepare for the next event. "The review of the extreme weather events were presented to the National Emergency Authority," Furshpan reports. "Even if the world is getting warmer, and even if temperatures rise and there are more extreme events, they will not necessarily break the records set in the 19th century and in the 20th century. But the data on the extreme events described in the review can definitely be used as a basis for scenarios which may happen in the future, and we can prepare accordingly." The year 2015 has been an interesting year in terms of climate. We experienced many heat waves, and we waited for the snow plows to complete their work so that we could watch and enjoy the white blankets of snow. While we know that the heat is not going anywhere, we can at least take comfort in the fact that man's activity is not exclusively responsible for the disasters we are experiencing, and that not every case of extreme weather can be linked to the climate change created as a result of man's activity. "The global warming and the rise in the frequency of extreme events do not necessarily go hand in hand," Furshpan concludes. "They are two separate things, and we have to check if they match. Most of the events are part of a natural change, and that doesn’t contradict the fact that the world is getting warmer and that man has played a part in this warming." The review and full research will be presented on Tuesday at the Annual Science and Environment conference . The article was first published on the Zavit website , a news agency on science and environment.