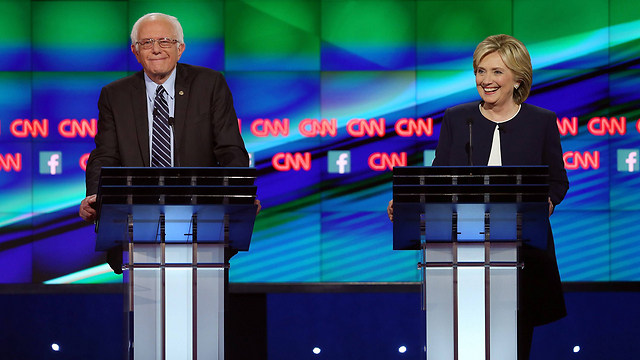 Bernie Sanders is not good for the Jews

Op-ed: The same undercurrents of racism which lurk behind much of the antipathy and criticism aimed at Barack Obama could morph into open anti-Semitism during a Sanders presidency

Bernie Sanders has surged in the polls among the Democratic candidates vying for the US presidency. This fact should worry Jews.

Mr. Sanders represents the leftist fringe of American liberalism. This constituency is notorious for its one-sided criticism of Israel and tolerance for the BDS movement. Although Bernie Sanders does not openly condemn Zionism, as a US senator he has repeatedly refused to support resolutions that empathize with Israel’s predicaments. Furthermore he has publicly criticized Israel for "overreacting" in the struggle against the Islamist Hamas movement.

These phenomena are ominous. They presage a future where Israel’s key ally might be led by a president who stakes out an even more neutral position in the conflict thrust upon Israel - even when Israel faces Islamists trampling women’s rights and basic religious freedoms.

By currying the favor of anti-Israeli powers in the region, the presidency of Barack Obama has greatly strained relations between the United States and Israel. A Sanders presidency is liable to perpetuate and accelerate this trend.

Sanders and Clinton. The Jewish people should remember that political visibility has rarely been beneficial for Diaspora Jewry (Photo: AFP)

Nevertheless, it is not only foreign policy that should worry Jews when pondering a possible Sanders presidency. Bernie Sanders, a self-proclaimed "democratic socialist," vows to sponsor a divisive economic and cultural agenda. Raising taxes, increasing welfare spending and bashing free-markets has traditionally aroused fierce resistance in America.

A Sanders presidency where capitalism is called into question and government spending balloons is bound to incense tens of millions of Americans. In this scenario, it is no minor detail that Bernie Sanders is Jewish. The same undercurrents of racism which lurk behind much of the antipathy and criticism aimed at Barack Obama during these years could morph into open anti-Semitism during a Sanders presidency. It is true that contemporary America is relatively clean of anti-Semitism. Yet prejudice and hostility tend to be rapidly roused by a threat to one’s lifestyle and traditions.

President Bernie Sanders, by challenging the premises of the American way of life, represents such a threat and will do a disservice to his country and to his people

Those who consider this prognosis to be overly pessimistic should remember that France had another socialist (and Jewish) head of government during the 1930s named Léon Blum. The domestic agenda of this prime minister was so divisive that it undermined France’s position vis-à-vis Nazi Germany and catalyzed France’s capitulation to Germany in 1940.

History may not repeat itself. Nevertheless, the Jewish people should remember that political visibility has rarely been beneficial for Diaspora Jewry. Hillary Clinton should thus be supported in her quest for the presidential nomination of the Democratic Party.