The PM near Gaza 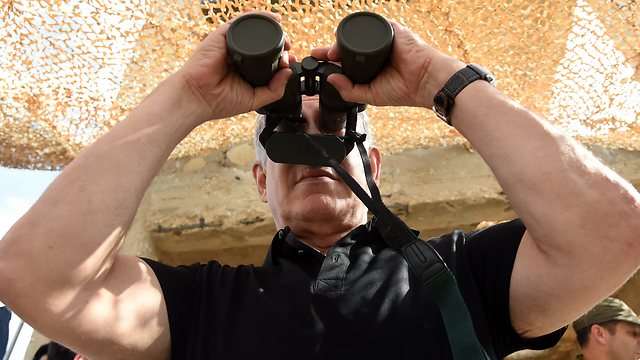 Netanyahu declares all quiet on the Gaza front during visit

The prime minister, defense minister, and senior IDF officers toured the Gaza border, where Netanyahu declared that the 'situation was under control.'

Prime Minister Benjamin Netanyahu visited the IDF's Gaza Division on Tuesday afternoon to receive an update on the forces' readiness following near-daily terror attacks in Israel and the West Bank, and frequent confrontations on the Gaza border. Netanyahu took advantage of a viewpoint to scope out the area; however failed to notice that his binoculars were covered.

"I am under the impression that the situation here is under control. We are currently acting according to a policy which aims to calm the tensions, while acting against the terrorists and forces of terror responsible - in the most proportional and reasonable manner, while only using the necessary amount of force," Netanyahu said.

The prime minister added that, "I think Hamas understands that we view it as the responsible entity for all that happens in the Strip, and that we will not allow a violation of our borders, or attacks on our people and territory."

The prime minister and his covered binoculars (Photo: Haim Horenstein)

Not far from where Netanyahu was visiting, clashes on the border went on into the late afternoon, with Gaza medical officials reporting that a 27-year-old Palestinian, Ahmad al-Sarhi, had been killed, and three others wounded in the clashes. The riots were taking place near the Al Bureij refugee camp in the north-eastern part of the Strip.

After the briefing, Netanyahu was taken to a vantage point which overlooks the Strip.

"We are conducting a campaign to safeguard the security of the State of Israel on a number of fronts. This includes preserving the quiet on the Temple Mount, in the West Bank, and in Gaza," he said, adding that "Every one of these fronts can escalate and set fire to the other fronts."

Defense Minister Ya'alon said that "There have been several attempts to violate Israel's sovereignty along the Gaza border. In recent days, our forces have taken control of the issue, and as we can see, the front is quiet." "You can see the (Israeli) communities are blossoming and growing, that is truly our answer to these actions," Ya'alon added.

The violent clashes on the Gaza border (Photo: Reuters)

Later on Tuesday, IDF and special police units posted along the Gaza border took out a sniper position which was the source of several incidents of sniper fire during the last week towards IDF troops. Palestinian medical sources reported that one man was killed.

The Palestinian causality later identified by Gaza sources as a field commander in the military wing of an Iranian supported Shiite military organization, Al-Sabarin.

The Israeli strike was one of the more serious incidents to take place on the border since operation Protective Edge.

According to Israeli estimates, the squad took advantage of the presence of Israeli security forces in close proximity to the fence in the last week in order to conduct at least two sniping attacks: The first on an empty defense ministry truck, and the second on a group working to fix the damaged border fence.

Gaza's ruling Hamas party refused to address Israel's claims that the Gazan sniper postiion was operating under the cover of the riots that took place near al Bureij.