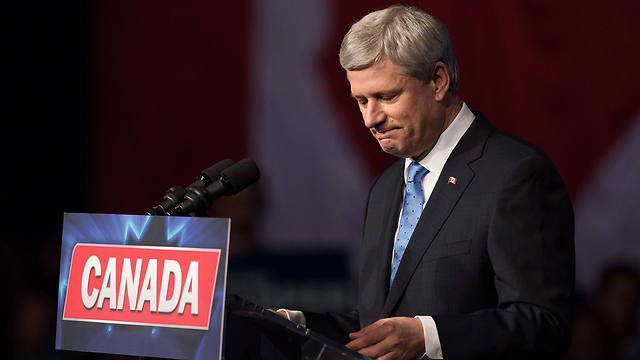 Op-ed: It is a very bad thing for the Canadian Jewish community domestically that it lost a tremendous supporter like Stephen Harper. Canada's relationship with Israel is more than a foreign affairs matter, and what happens there affects Jews there and around the world.

What does a liberal majority government in Canada mean for Israel? To be honest, not much. Canada is but one vote at the United Nations among a sea of Arab/European hostility dotted with small islands of support.

On the world scale, Ottawa is not Washington, Canada is not the United States, and we do not possess the might requisite to play superpower politics. But if this editorial ended here, I would be making the erroneous mistake of classifying "the Israel file" has purely a foreign affairs issue.

Being both an active Conservative partisan and vocal pro-Israel advocate on my university campus, I am quite upset over the electoral defeat of Stephen Harper and his Tories. The Jewish community in Canada, that is, those who are politically aware, community-minded and have a spiritual connection to the Land of Israel, is not in a good position.

It is a very bad thing for Canada's Jewish community domestically that we lost a tremendous supporter. Canada's relationship with Israel is more than a foreign affairs matter. What happens there affects Jews here, and around the world. Palestinian and Arab military hostility reverberates the world over, manifesting in Canada as distorted news headlines, swastikas spray-painted in Jewish neighborhoods and anti-Israel demonstrations that habitually turn violent.

As global anti-Semitism continues to rise, Iran prepares for war with Israel and Jewish students are immersed in the toxicity of Israel Apartheid Week on campus, we really need strong, moral leadership going forward (Photo: AP)

In my adult life I have experienced firsthand "new anti-Semitism." I've witnessed the appalling international isolation of Israel at the United Nations, and I have felt the creeping uncertainty of where and whether or not the Jews of the world belong. It makes me very sad to see such a strong and clear moral authority such as Harper lose office, because when facing all of these struggles I could remind myself that despite it all, I had someone strong in my corner in Ottawa there for me.

Throughout this grueling 78-day campaign, I have heard in debates locally and nationally that support for Israel is not a partisan in this election, because all three major federal party leaders are supposedly supportive. I've written a dissection of this idiotic talking point before, and while there are certainly some who "oppose BDS" and "believe Israel has a right to exist," most Liberals tow the party lines of supporting "a two-state solution."

You'll always see Liberal politicians attending events put on by the big Jewish community organizations and they'll get a crowd there for the UJA Walk With Israel, but none of this stuff requires any particular moral courage. That's "Liberal Party pro-Israel".

"Liberal Party pro-Israel" is not the same as "Conservative Party pro-Israel." Aside from the simple point of Liberal politician belonging to a party with a growing anti-Israel faction (while none such exists in the Conservatives), Liberal Party support for the Jewish State is lukewarm. Nobody from the Liberals really when Liberal MPs started blaming Israel for the 2006 war with Lebanon, instead urging restraint as Hezbollah launched rockets into Israeli civilian areas.

Even in 2011 before the Conservative took a majority mandate, Liberal MPs like Ken Dryden, who represented a riding (what we call the 338 electoral districts in Canada) with a Jewish community so large it accounted for a good portion of Jews nationally, could only make statements in parliament denouncing Israel Apartheid Week has his apathetic caucus members talked and listened faintly.

A few month ago, prior to the beginning of the election, I had a conversation with a former member of the Liberal Party caucus at a private function. Having just returned from campaigning, we engaged in a conservation about Israel and Canada. "What happens to Israel within the Liberal Party when the 'old guard' is gone?" I asked.

Having listed three names of past and present pro-Israel Liberals, the response disturbed me. "Nothing. None of those people ever stood up for Israel inside of "those closed-door meetings in Ottawa," apparently. Obviously the senator in question and those MPs whom I was asking about will remain nameless, but I was quite surprised.

Having an understanding of the political topography of Canada's Jewish community, I know who is reputed to be "Liberal Party pro-Israel" that will be entering Justin Trudeau's Liberal caucus when parliament convenes. I can count them with one hand.

Conversely, the amount of newly elected Liberal MPs who can be identified as hostile to Israel in Toronto alone matches this, and along with the examples from across the country, and the newly elected Liberals with no history yet but will conceivably join their caucus' growing anti-Israel wing, we are looking at a newly formed government that is potentially quite anti-Israel. The best we can hope for is a new government that is lukewarm, with a cabinet with the least amount of Liberals from the anti-Israel wing and the most amount from the pro-Israel wing.

It's a real shame that Harper was defeated as far as this topic is concerned. During the last conflict with Hamas Conservatives from coast to coast supported Israel while rockets rained down and Hamas tortured innocent Gazans. And some Liberals, like some who just got elected, put the blame on Israel, defended terrorism, and showed their true Liberal colors.

Now we have 184 Liberal MPs backing their bags for Ottawa. Who is to say what'll happen the next time. Perhaps in the next sadly inevitable conflict we will have a full chorus of elected Liberals condemning Israel's targeting of "women and children" as "blind and cruel."

So this is the hand we have been dealt with domestically, but that doesn't mean it isn't still an issue internationally. Justin Trudeau will likely return Canada to the age-old Liberal tradition of stabbing Israel in the back at almost every opportunity in the United Nations, embracing fascists and dictators, and generally approaching the volatile world of international terrorism and conflict with a child-like naiveté.

I am saddened about the defeat of the Harper government, and for more reasons that just the loss of a true supporter of Israel. Living in a community with a future uncertain, as global anti-Semitism continues to rise, the Islamic Republic of Iran prepares for war with Israel, and Jewish students continue to find themselves immersed in the toxicity of Israel Apartheid Week on campus, we really need strong, moral leadership going forward.

With all these woes and problems, it really is daunting, and I'm expecting a difficult four years. We need a prime minister who will keep Canada strong, principled, enlightened, and morally courageous, like Stephen Harper has. My fear, and my expectation, is that Justin Trudeau is none of these things.