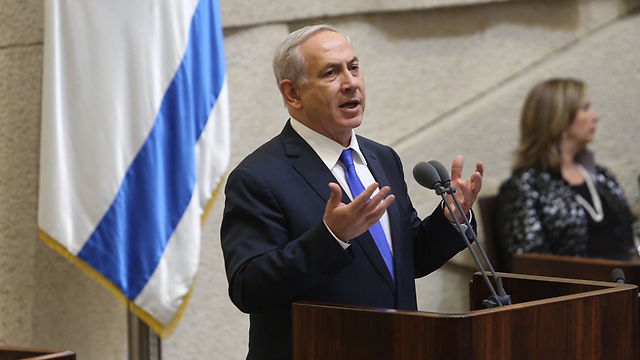 Prime Minister seemingly changes his tone regarding the role played by the Mufti in the holocaust, stating, 'The decision to move from a policy of deporting Jews to the Final Solution was made by the Nazis and was not dependent on outside influence.'

Prime Minister Benjamin Netanyahu has walked back his controversial remarks which sought to highlight the role played by Jerusalem Mufti Haj Amin al-Husseini, in convincing the Nazi leadership to implement the final solution in a Friday Facebook post.

"I wish to clarify my remarks about the connection between the Mufti Haj Amin al-Husseini and the Nazis," the prime minister said. "In no way did I intend to absolve Hitler of his responsibility for the Holocaust. Hitler and the Nazi leadership are responsible for the murder of six million Jews," the post said.

In a complete departure from his previous remarks which continued to link the Mufti to the final solution, the prime minister clarified that, "The decision to move from a policy of deporting Jews to the Final Solution was made by the Nazis and was not dependent on outside influence. The Nazis saw in the Mufti a collaborator, but they did not need him to decide on the systematic destruction of European Jewry, which began in June 1941."

"My remarks were intended to illustrate the murderous approach of the Mufti to the Jews in his lengthy contacts with the Nazi leadership. Contrary to the impression that was created, I did not mean to claim that in his conversation with Hitler in November 1941 the Mufti convinced him to adopt the Final Solution. The Nazis decided on that by themselves," Netanyahu added, in an attempt to explain the remarks which grabbed global headlines nearly 10 days ago.

Netanyahu had claimed that the interpretation of his remarks as an absolution of the Nazis for their role in the Holocaust was "absurd."