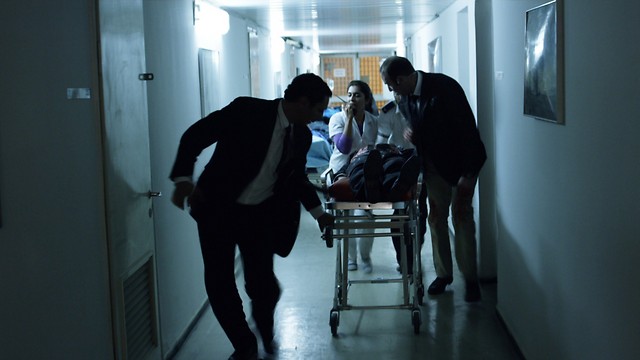 In his complex and seemingly disorganized way, director Amos Gitai has crafted a memorial of the Israeli PM's murder and the incitement that preceded it, as well as a stinging indictment of today's politicians. From this perspective, 'Rabin, the Last Day' touches the raw nerves in Israeli society without resorting to clichés.

"Rabin, the Last Day," a monumental new film from director Amos Gitai, sets itself a tough task: it asks to be the definitive work on one of the most horrendous traumas undergone by the Israel.

This mission is testified to not only by the title, which addresses the subject directly, but also the running time – at 153 minutes, it is the longest Israeli film ever made. Even the decision to hold a somber premiere at the Culture Palace in Tel Aviv on November 4, the 20th anniversary of the murder, is telling.

From this perspective, it is an important film. Perhaps the most important film made in Israel since "Life According to Afga," which failed to predict the insane violence that would lead to murder.

But it is also an interesting film that deals expansively with the question of how to handle trauma. How do you represent it? What is the nature of a cinematic text that seeks to return to that day and restore to it a tragic intensity that at times seems to have faded away? Gitai already undertook this journey in his documentary "Zirat Haretsach" ("Scene of the Murder"), parts of which are interwoven here and in which he sought to sketch a portrait of a society in trauma.

"Rabin, the Last Day" is a cinematic collage that interweaves well-known archive footage (the demonstration in the square, news reports on the assassination), transcripts from the Shamgar Committee hearings into the failures that allowed the murder to take place, examples of incitement by settler rabbis and the extreme Right against the prime minister, and of course a return to the murder itself and the prime minister fighting for his life in Ichilov Hospital.

A scene from Amos Gitai's 'Rabin, the Last Day'
Gitai's film does not seek to innovate. It doesn't offer the "JFK"-style conspiracy theories of Oliver Stone, nor is it a story that recounts minute-by-minute the events of November 4, 1995 from a specific viewpoint or a dynamic and broad perspective. On the contrary – the film confronts us with claims and possibilities that are already known in order to create a narrative that is made up of question marks, points the finger of blame in multiple directions (including that of the serving prime minister). It also generates feelings of horror and despair with the final, wondrous shot that closes the film.

Every film on this trauma raises in advance and in retrospect the question of whether it could have been done any other way. And in general, how can one tell this story, touch that wound, and who is this film aimed at? Should it be stately and unifying, as are memorial ceremonies, or should it be provocative, challenging and irritating? Can a film such as this not be problematic in advance?

A scene from Amos Gitai's 'Rabin, the Last Day'
Aside from that, one of the most interesting aspects of the film is the absence of an actor portraying Rabin. Former soccer player Motaleh Spiegler was cast in the role and filmed in scenes that went back to the murder at the foot of the Tel Aviv municipality building, but none of that made it into the film (except for zoomed out scenes or parts of his body during the reconstruction of the murder). By taking this path Gitai has not only bypassed the question of bridging the gap between the actor and the historical personality he is portraying, but also in a strange and effective way leaves behind Rabin himself as a "character" in a film about his last day. Above all, Gitai's film succeeds where all other Israeli cineastes have failed until now: dealing directly with the murder, the public atmosphere that preceded it, and finding and locating guilt. The radio silence about the murder that has prevailed in Israeli films is also understandable. It points to the confusion and fear that settled over this place. "Rabin, the Last Day" is not a film that offers consolation. It's also not a film that proposes to expose the "truth" about the murder. Its seemingly confused structure also reflects the national trauma and the fragmentation of Israeli society, fragments that called – and still call for – strained unity.

Mainly, the film says – via its final shot – that there is a direct line between the murder and today's political situation (the film, by the way, addresses this less gently, for which it deserves applause).

A scene from Amos Gitai's 'Rabin, the Last Day'
Not everything in the film works. Both the treatment of the "Pulsa diNura" ceremonies and the introduction of a sleepwalking psychologist (played by Dalia Shimko), who diagnoses Rabin with some kind of schizoid personality, seem more comical than effective and in the end damage the ideological complexity of the film. There is also something didactic about the interview with the foreign minister of that time, Shimon Peres, that opens the film and may well be superfluous to the Israeli viewer who remembers that day and the events that led up to it. The film has difficulty with its representation of Yigal Amir (played by Yogev Yefet). The issue is not with the physical resemblance between the two, but rather the attempt to decode the man and offer a more profound interpretation of his motives. And no, the scene in which the rabbi of his yeshiva indicates his consent is not an interpretation as such. "Rabin, the Last Day," despite and perhaps because of its flaws, is a meaningful and interesting film. Without a doubt, it is Gitai's greatest creation since "Kippur" (2000). The importance of Gitai's film is its attempt to create an inclusive narrative of the event, to describe the trauma from an almost clinical distance and, overall, that those who are indirectly guilty of the murder are still found among us. From that perspective, it is a horrifying movie.