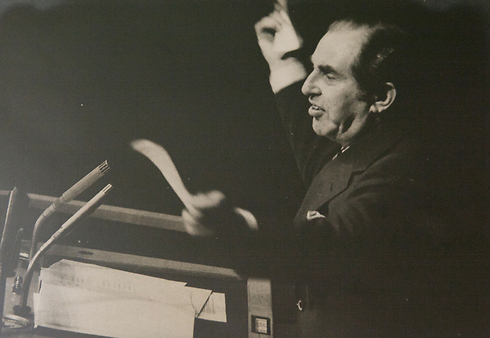 In event marking 40 years to UN resolution equating Zionism with racism and Chaim Herzog's famous speech condemning it, UN Secretary-General Ban pledges 'to stand up to hatred and ignorance.'

US Secretary of State John Kerry urged the world on Wednesday to condemn rising anti-Semitism and bigotry and unite in the struggle against violent extremism and "terrorist bigots," speaking Wednesday at a commemoration of the 40th anniversary of the adoption of a UN resolution equating Zionism with racism.

Kerry called the 1975 resolution ominous because it gave "a global license to hate" the state of Israel, and he called on diplomats and governments to do everything in their power to prevent the United Nations from being hijacked again "for malicious intent."
Kerry speaking at the event    (צילום:רויטרס, עריכה:ניתאי לב אורן)
X

Kerry speaking at the event

Kerry paid tribute to Israel's then UN ambassador Chaim Herzog who told the General Assembly after the resolution's adoption that it was nothing more than "a piece of paper" based "on hatred, falsehood and arrogance." Herzog, who later became Israel's president, then tore it to pieces.

Chaim Herzog, then Israel's ambassador to the UN, tearing up the resolution equating Zionism with racism (Photo courtesy of the Herzog family)

"The Zionist dream embraces the concept of Israel as a Jewish democracy, a beacon of light to all nations," Kerry told the event.

"That dream can only be upheld by two states living side by side in security.

"We all know from years of discussion and efforts: this is not an impossible dream. It is achievable."

Kerry argued that choosing to recognize a Palestinian state "demands courage, demands leadership" and likened that choice to Herzog's actions at the UN 40 years ago.

"Fear and bigotry can be defeated, but those are choices we now get to make. So now it's our turn."

The call for an Israeli-Palestinian settlement resonated at the United Nations, where reviving the peace process is becoming a top agenda item at the Security Council.

Council members are weighing a draft resolution, presented by New Zealand, that declares the two-state solution as "the only credible pathway to peace" and demands that both sides prepare for new talks.

The US secretary of state, who met earlier this week with Prime Minister Benjamin Netanyahu, was a late addition to the program which included Herzog's son, Isaac, currently Israel's opposition leader, and UN Secretary-General Ban Ki-moon.

The event, organized by Israel's UN Mission and attended by more than 400 diplomats and members of Jewish organizations, came on a day that the European Union announced that it will start labeling Israeli products made in the West Bank, a move denounced by Israeli leaders.

Secretary-General Ban said the 1975 adoption and 1991 repeal of the resolution equating Zionism with racism must be seen as "a lesson."

"Today, our focus must be on the many manifestations of hatred and intolerance that blight the global landscape - resurgent anti-Semitism, wide-ranging anti-Muslim bigotry and attacks, discrimination against migrants and refugees," the UN chief said. "Today, let us pledge to stand up to hatred and ignorance ... and uphold our shared commitment to equality and human dignity."