From film "The Day Hitler Died" 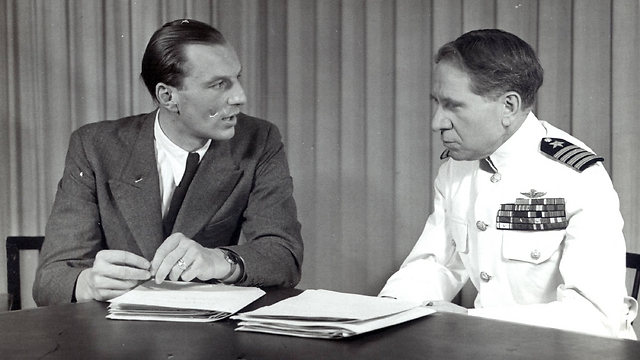 'The Day Hitler Died,' a documentary film which interviews the Nazi leader's inner circle describing his final hours, is to be aired outside Germany for the first time.

American television viewers will get their first chance to see and hear Adolf Hitler's inner circle describe the dictator's final hours in filmed interviews when "The Day Hitler Died" premieres on the Smithsonian Channel.

The documentary marks the first time viewers outside Germany will see the filmed interviews by Michael Musmanno, a Navy attorney who presided at one of the Nuremburg war crimes trials and later became a Pennsylvania Supreme Court justice. After the trials, Musmanno spent more than two years tracking down witnesses and re-interviewing them on camera in 1948 to prove Hitler was dead, hoping to thwart rumors spawned when Soviet dictator Josef Stalin claimed Hitler had escaped his underground Berlin bunker.

Baron von Loringhoven, left, Hitler's aide-de-camp, with Judge Michael Musmanno (Photo: AP)
"There can be no doubt that Adolf Hitler, the fuhrer of Germany, the master criminal of the world, the greatest gangster who ever disgraced the human race, is dead," Musmanno says, concluding the interviews.
German Cinema
Hitler comedy conquers German box offices
Amir Bogen
'Look Who's Back,' released in early October, in which the Führer awakes in modern-day Germany, is a phenomenal success in the motherland.
Hitler comedy conquers German box offices
The films "give you a sense of what they were thinking, why they were there, and why they would stay in the bunker," said Thomas White, the archivist tasked with preserving the films at Duquesne University in Pittsburgh. "The Nazis were like the generic villains of the 20th century, but that's the real danger," White said. "We tend to forget that some people found them charming and how they got there and came to power."

Hitler addressing his top generals in 'The Day Hitler Died'

Buoyed by news that US President Franklin Roosevelt died April 12, 1945, "Hitler went into a dance and congratulated himself as if he had himself had brought about this event," Hitler's press attache, Heinz Lorenz, told Musmanno. "He exclaimed, 'This will mean I will win the war.'"

But 10 days later, Hitler's mood permanently darkened upon learning that one of his generals refused to lead a suicidal counter-attack with a rag-tag collection of German army units. "He collapsed and said, 'It's all over, and I'll shoot myself,'" Lorenz recalled. But it would be eight days before Hitler would shoot himself alongside Eva Braun, his longtime mistress who took a poison capsule and died beside Hitler the day after they were married. In the meantime, the 16-room bunker, with its 12-foot thick concrete ceilings and walls some 30 feet below ground, became a macabre Neverland as Hitler's confidants and staff awaited his suicide. "After April 22, he talked about it constantly," said Traudl Junge, the secretary to whom Hitler dictated his last will and testament. Or, as German Army Major Baron von Loringhoven told Musmanno, "The bunker became a mortuary and the people in it living corpses." Musmanno wrote a book based on his interviews, "Ten Days to Die," published in 1950. But the films were lost for decades and became available for American viewing only two years ago. Musmanno died in 1968 after a storied career in which he also represented on appeal Nicola Sacco and Bartolomeo Vanzetti, Italian anarchists some believe were wrongfully executed for a murderous Massachusetts shoe company robbery in 1920. Musmanno willed his many personal papers and the films to two nephews who have also since died, said Musmanno's great-niece Patricia Homer, who now owns the films. The nephews turned over the material to Duquesne, a Catholic school in the city where Musmanno was considered an Italian-American folk hero. At first, the school tried to re-create Musmanno's chambers before realizing the papers and other materials were not properly stored and were deteriorating. The school had begun a decades-long effort to properly store and catalog the records when a German production company, Spiegel TV, learned of the films in about 2007. The resulting documentary, "Witnesses of Doom: The Lost Interviews," aired in Germany in 2010, but the rights agreement kept Scottish-based Finestripe Productions from accessing the films until 2013, said White, the archivist. The money raised by selling the documentary rights to the films is being used to preserve them, White said. "The Day Hitler Died" premieres on the Smithsonian Channel on Monday evening.