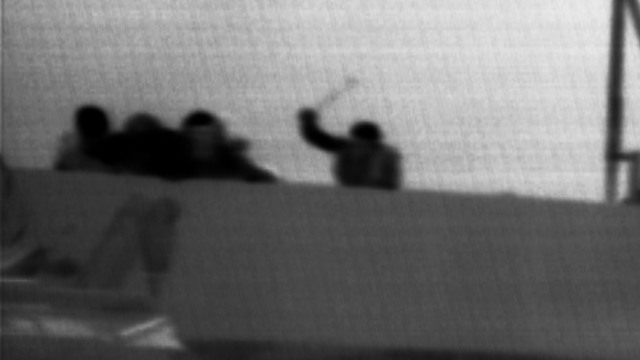 Spain could detain Netanyahu over Marmara raid if he enters country

Spanish judge finds legal loophole that allows to hold PM and six other Israeli officials for questioning in lawsuit against them filed by three Spanish nationals who were on Gaza-bound flotilla.

A judge in Spain has found a legal loophole that would enable authorities in the country to detain Prime Minister Benjamin Netanyahu and six other Israeli officials over the 2010 Israeli Navy raid of the Mavi Marmara.

Judge Jose de la Mata of Spain's National Court (Audiencia Nacional) instructed Spanish police over the weekend to monitor the movements of Netanyahu and the six other ministers and former ministers who made up "The Seven" forum at the time of the raid.

The seven were sued in the past by three Spanish nationals who were aboard the Gaza-bound flotilla, where ten Turkish nationals, including one Turkish-American, were killed.

The raid on the Mavi Marmara (Photo: IDF Spokesman)
In a 2010 ruling in the three Spanish nationals' lawsuit, a judge determined that since Spain's National Court no longer has the authority to file lawsuits in international incidents, the complainants should turn to the International Court of Justice (ICJ) at The Hague. Judge de la Mata, who has been examining the case, recently found a loophole that would allow Spanish authorities to relaunch their investigation into the raid if any of the seven Israeli officials enter Spain. If any of the seven do enter the country, a Spanish judge could detain them, hold them for questioning and even place them under arrest. However, Spanish law determines the court does not have to take such steps against Prime Minister Netanyahu, especially if the government of Spain determines he has diplomatic immunity. Foreign Ministry spokesman Emmanuel Nahshon said in response: "This is an issue that has been subject to legal proceedings for several years now. The State of Israel and the embassy in Madrid have been in communication with legal authorities in Spain and handling the issue. We hope that the case will be closed soon, as it should have been a long time ago."