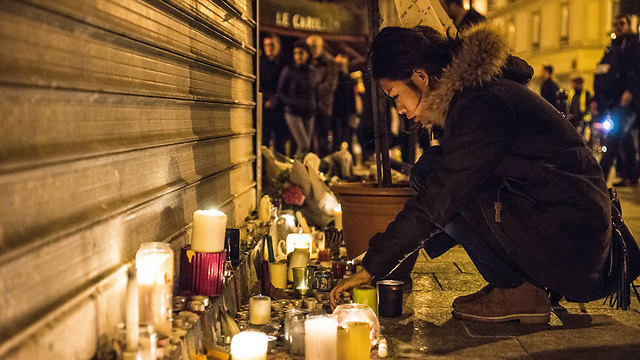 Paris's Bataclan, which until recently was under Jewish ownership, was target for threats by Islamic extremists for years before becoming a main target in coordinated terror attacks by ISIL.

The massacre on Friday that killed at least 80 at the Bataclan theater was not the first time that the veteran concert hall in Paris's 11th district, was put in danger by Islamic terrorists. In 2011, Farouk Bin Abbas, a French Muslim extremist , told French intelligence during an interrogation that he and his fellow members of the Jaysh al-Islam organization planned on attacking the Bataclan because "its owners are Jewish."

The hall was also threatened in 2007-2008 because of the fact that it routinely hosted conferences of Jewish organizations, as well as a fundraiser for the IDF and Israeli Border Police. In 2008, during Operation Cast Lead, a video was uploaded to the internet that showed about ten youths with masks on, supposedly Palestinians, who threatened the Bataclan, because it was hosting a special gala event for Israel's Border Police.

Mourning outside the Bataclan, following the attacks. (Photo: MCT)

The colorful hall, which was established at the end of the 19th century, is an inseparable part of Parisian nightlife. Last September it was sold, after many years of being owned by the Jewish Laloux family.

Pascal Laloux told Channel Two news that the attack could cause more people to leave France for Israel or another country.

What's certain is that people won't feel safe after what happened here," he said. "The government is not taking the required steps. We live in a democracy. There are rules. We can't do whatever we want, and they (the terrorists) have no rules.