Limmud FSU conference in Lviv. 'We don’t take sides in the Russian-Ukrainian conflict' 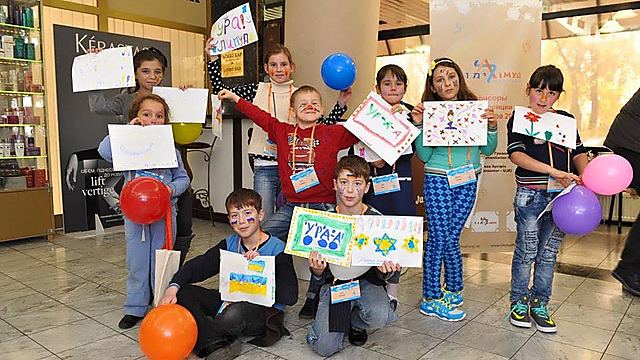 Singing jazz in Yiddish: The revival of Jewish life in Lviv

Hundreds of Russian-speaking Jews from all over Ukraine gather for three-day conference to study Judaism and Zionism; 'It's a great privilege to learn, deepen our knowledge and strengthen our Jewish identity.'

The city of Lviv, which was known as a Jewish center before the Holocaust, experienced destruction and years in which it lacked any sign of Judaism. This is one of the reasons why Lina Ostapchuk of the Lviv Municipality (today in western Ukraine) is so excited.

More than 750 Jews flocked to the city on the weekend of November 5-8. They arrived from all over Ukraine to participate in the three-day Limmud FSU conference for former Soviet Jews, which was organized entirely by local young Jewish volunteers.

"We wish to return Zionism to the Jewish community in Ukraine and give them a feeling of belonging," says Chaim Chesler, the organization's founder and the driving force behind its worldwide activity. "We don’t take sides in the Russian-Ukrainian conflict."

For the past decade, the organization has been spreading Jewish consciousness and creating a framework for Russian-speaking Jews, wherever they are. This time, there were 150 meetings, workshops and performances in a city which has some 5,000 Jewish residents today.

The events held around the memorial day marking 20 years since the assassination of Yitzhak Rabin were attended by the slain prime minister's bureau chief, Eitan Haber, Lviv Mayor Andrii Sadovyi, Israeli Ambassador to Ukraine Eliav Belotsercovsky and David Yonatan Greenberg, the son of Israeli poet Uri Zvi Greenberg, who was near Lviv in the 19th century and wrote and studied in the city for years before immigrating to Israel.

Connecting the future generation in Lviv

During the long Limmud weekend, David Yonatan took a special tour in search of his father's roots. He visited the village of Bilyi Kamina, where Uri Zvi Greenberg was born, and visited his childhood home, which the poet often described in his work over the years.

"Every time I participate in a Limmud event, I learn more and more fascinating things about Judaism, about the State of Israel and about myself," says 19-year-old Anna Zelikman, who arrived at the event with her parents and two siblings.

"The atmosphere here is like one big family meeting. Last year I met some of my best friends here. Beyond that, it's mainly a great privilege to learn, deepen our knowledge and strengthen our Jewish identity."