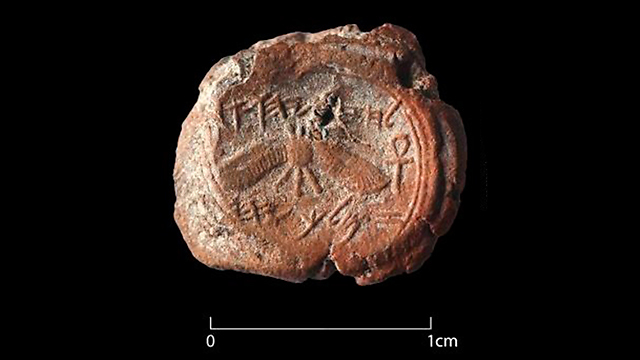 Major archaelogcial discovery as first-ever seal impression of an Israelite or Judean king found in location of a scientific archaelogical excavation.

A seal impression of King Hezekiah (698-727 BCE) was discovered at the foot of the southern wall of the Temple Mount, the first time a seal of an Israelite or Judean king was ever exposed in situ in a scientific archaeological excavation.

The discovery was made at the Ophel excavations at the foot of the southern wall of the Temple Mount being conducted by the Hebrew University of Jerusalem’s Institute of Archaeology under the direction of Dr. Eilat Mazar.

Measuring 9.7 X 8.6 mm, the oval impression was imprinted on a 3 mm thick soft bulla (piece of inscribed clay) measuring 13 X 12 mm. Around the impression is the depression left by the frame of the ring in which the seal was set.

The bulla originally sealed a document written on a papyrus rolled and tied with thin cords. It was discovered in a refuse dump dated to the time of King Hezekiah or shortly after, and came from a Royal Building that stood next to it.

This building, one of a series of structures that also included a gatehouse and towers, was constructed in the second half of the 10th century BCE (the time of King Solomon) as part of the fortifications of the Ophel — the new governmental quarter that was built in the area that connects the City of David with the Temple Mount.

Dr. Eilat Mazar said that "although seal impressions bearing King Hezekiah's name have already been known from the antiquities market since the middle of the 1990s, some with a winged scarab (dung beetle) symbol and others with a winged sun, this is the first time that a seal impression of an Israelite or Judean king has ever come to light in a scientific archaeological excavation.”

The historical impression was found by wet sifting layers of excavated soil, during a renewed excavation which began six years ago funded by Daniel Mintz and Meredith Berkman of New York, in cooperation with the Israel Antiquities Authority which performs the conservation work and preparation of the site for visitors. The excavations are being carried out in the Ophel Archaeological Park which is part of the natural park surrounding Jerusalem's Old City walls.