Rioting outside the Jacir Palace hotel in Bethlehem (Photo: AP) 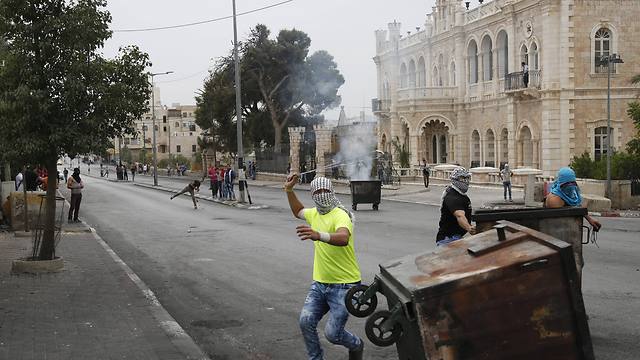 BETHLEHEM - With Christmas only weeks away and the latest Israeli-Palestinian violence showing no signs of abating, gloom has descended on the century-old Jacir Palace hotel in Bethlehem, famed for its soaring stone archways and wrought iron balconies.

The traditional Christmas party has been nixed and reservations are down 50 percent. Empty tear gas canisters litter the street in front of the hotel and charred stains mark spots where protesters burned tires.

After almost three months of absorbing stones and rubber bullets, nearly every front window of the hotel is cracked. When Palestinian youths clash with Israeli troops outside, guests are forced to use the back entrance to dodge plumes of smoke and tear gas.

Rioting outside the Jacir Palace hotel in Bethlehem (Photo: AP)

Much of Bethlehem is in a similar funk.

Christmas Eve is a major event for the biblical town, drawing thousands of foreign tourists each year and giving a huge jolt to local businesses. This year, the holiday spirit will be harder to find.

Italian tenor Andrea Bocelli, scheduled to perform in December, has called off his visit. Sellers of olive wood souvenirs say they have nearly no customers, and Bethlehem hotel owners are struggling to fill their beds, especially after 11 new hotels opened in the last three years.

Mayor Vera Baboun said the city would only decorate Manger Square, home to the church that hosts the traditional birthplace of Jesus, and two nearby streets, instead of all of downtown.

"Every year, when we light the tree, usually there is a huge display of fireworks, but this year we will ring church bells instead," said Baboun. The bells, she added, will remind everyone "that we exist despite all the catastrophes."

The latest wave of violence erupted in mid-September. Israel blames the violence on incitement by Palestinian leaders and on social media sites. Palestinians say the attacks stem from a lack of hope for gaining independence after years of failed peace efforts.

In October, 27-year-old Moataz Zawahra, one of Jacir's waiters, was shot and killed by Israeli troops at the hotel's entrance. The Israeli military says he threw a firebomb at the soldiers; his colleagues say they did not see him attacking troops. He was off duty when he was shot.

Scorch marks on the road outside (Photo: AP)

On Friday, Palestinian youths dragged metal garbage cans across the street in front of Jacir, hurled rocks at the Israeli guard tower and set tires on fire so the grey smoke would help hide them.

As the troops fired the first round of tear gas and the acrid smell reached the courtyard lobby, Kattan paced the reception area, checking to make sure no guests were nearby and that the staff had followed his instructions.

"Everyone knows what to do," Kattan said. "It has become routine." He went through the motions of calling the Palestinian police, which he said would not arrive. Then he went on lunch break. Outside, 19-year-old protester Ahmad Sarahat from Bethlehem covered his mouth with the sleeve of his sweatshirt to shield himself from the tear gas. "We want them to leave," said Sarahat, pointing at the Israeli watchtower. "We are not afraid." Kattan and others at the hotel hope it will weather the storm, as it has so many times in the past. Built as a palace in 1910 by Mayor Suleiman Jacir who used French architectural blueprints and local pink and white stone, the estate was once surrounded by olive groves. The nearest structure was Rachel's Tomb, a shrine Jews revere as the burial place of the biblical matriarch and where once a mosque stood, Muslims say.

After the Jacir family went bankrupt, the palace became a prison, then British military headquarters and a school, according to Nada Atrash, a Bethlehem architect. In 1948, when Israel was formed, Palestinian refugees streamed into a refugee camp behind the palace; today it's a maze of concrete homes, with laundry lines stretched across the narrow streets.

After Israel and the Palestinians signed the Oslo Peace Accords in 1993, Palestinian businessmen invested $50 million to transform it into a hotel. The late Palestinian leader Yasser Arafat laid the hotel cornerstone in 1998. The Denham, England-based InterContinental Hotels Group signed a 15-year contract with the local investors.

"Everything looked nice and beautiful and everybody thought now this is time to make some money," said Kattan.

The optimism was short-lived. Doors to the 250-room hotel opened in May 2000 but shut within months as the second intifada, or Palestinian uprising, began. Israeli troops used the hotel as a military base, sandbagging the windows and surrounding Rachel's Tomb with concrete slabs to prevent Palestinian gunmen from attacking Jewish visitors.

The hotel reopened in 2005 as tourism began to recover but the last two years have been a challenge. In 2014, roughly 4,500 foreign tourists visited Bethlehem on Christmas Eve, half the number from the year before because of a summer war between Israel and Hamas.

Kattan, the manager, said he is grateful for the timing of the current protests at least - it's too cold to use the pool now and most of the clashes happen in the afternoon, when guests are out sightseeing.

The hotel staff do their best, he said. All the steel shutters on the front windows close at first signs of skirmishes and the guests are escorted out of the airy courtyard that quickly fills up with tear gas. The guestrooms are in the back of the property, far from the melee. No guests have been hurt in clashes, he said. In a blow, the InterContinental Hotels Group did not renew its contract with Jacir Palace last year. Pascal Gauvin, InterContinental's Chief Operating Officer of India, Middle East and Africa, said they had no choice because the hotel was not able to operate normally "most of the time, due to the volatility in the region." Still, a week ago, the staff strung boughs of holly across the courtyard. Kattan said they expected a full house for Christmas Eve, in part due to generous discounts. Maria Uribe, a tour guide from Richmond, California, was dining at the hotel last Saturday with her group of 11 visitors who are following in the footsteps of Jesus in the Holy Land. "We feel safe," Uribe said. "The people are very kind."