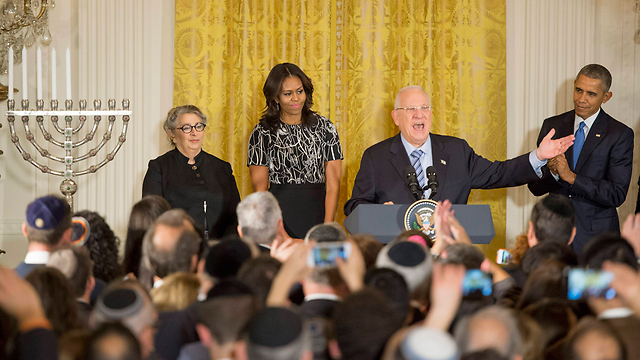 The father of one of the suspects in the Dawabsheh family arson-murder case published an inflammatory post on Facebook against the President, following his recent White House visit.

The father of one of the alleged Jewish terrorists, who is suspected of taking part in the attack on the home of the Dawabsheh family in Duma, published a fiery post against President Reuven Rivlin, following the latter's recent visit to the White House, and meeting with US President Obama. Presidents Rivlin and Obama held a Hanukkah candle-lighting ceremony during Rivlin's visit to the White House, which is referenced in the hateful post.

"I didn't see a yarmulke on the head of Fuhrer Rivlin as he lit candles at the Arab's Black House," the post said, "I'm convinced that he didn't say the prayers during the lighting, but let's say he did wear a yarmulke and said the prayers, there is no greater (case of religious pronouncement while simultaneously being god's enemy) in the history of the people of Israel as far as I'm concerned."

The Obamas, Rivlin's, and the Hanukkah Menorah. (Photo: EPA)

This isn't the first time the man, whose name is under gag order, has posted hateful words about the state and its leaders. Ever since his son was arrested, the father has attacked authorities online. "If there was a droplet of justice in this country I'd expect heads to be lopped off when the truth about this affair comes out, but this state is itself the criminal, and how can you have the criminal judging themselves," wrote another suspect's father, attaching a poster that said "Bogie (the nickname of Defense Minister Moshe Ya'alon. –ed) lives in Duma-land."

The three suspects in the case who are minors have been prohibited by authorities from speaking with their attorneys, Hai Habar and Adi Keidar, who emphasized that their clients have no criminal records and that "preventing a meeting between lawyers and arrested suspects is an extreme act that should only be done in 'ticking time bomb' cases."

The state's representative on the matter said in response, "In the circumstances, and with the severity of the accusations levied against the appealers in mind, there is great significance in continuing to prevent them from meeting a lawyer."