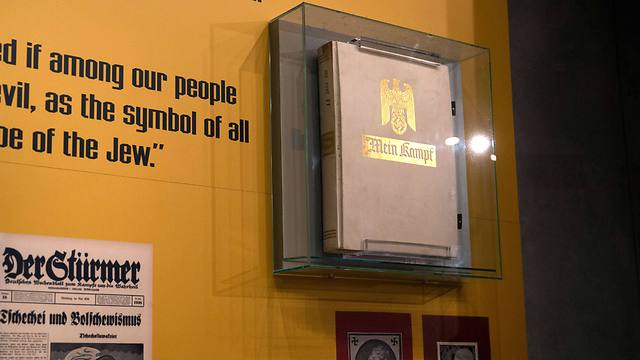 With Hitler's rambling anti-Semitic rant due for re-publication in Germany after its copyright expires, the controversy is having particular resonance in Israel, where memories of the Holocaust run deep and the book remains taboo.

The controversy over the upcoming re-publication of Adolf Hitler's "Mein Kampf" in Germany is having particular resonance in Israel, where memories of the Holocaust run deep and the book remains taboo.

Hitler's anti-Semitic rant, which he wrote from prison in the early 1920s, loses its copyright in Germany on Friday, and the country's first release of it since 1945 is due out soon in the form of an extensively annotated version.

A copy of 'Mein Kampf,' Hitler's anti-Semitic rant, which he wrote from prison in the early 1920s, is seen displayed at the Yad Vashem Holocaust Museum in Jerusalem (Photo: AFP)

The copyright had been held by the German state of Bavaria, to which it was granted by the victorious Allies after World War II, and now enters the public domain.

New versions are expected in many countries, sparking fierce debate over how one of the most controversial books in history should be treated.

Mein Kampf - which means "My Struggle" - does not face a total legal ban in the Jewish state, but any large-scale publication remains forbidden, the Israeli culture ministry says.

Even if there were no restrictions at all, publishers say there is still stigma around the book in a country formed after the Holocaust inspired by Hitler's writings.

According to the Foundation for the Benefit of Holocaust Survivors in Israel, 180,000 of them live in the Jewish state.

Murray Greenfield, founder of Gefen Publishing, which specialises in works about Judaism and its history, said he wouldn't publish it "even if they paid me."

"My wife is a Holocaust survivor," he said. "We have a built-in censorship on this book, in spite of being very much against censorship (generally)."

In many countries, including some of Israel's Arab neighbours, copies of the book are widely available. It can also be found on the Internet, including in Israel, so those keen to access it are able to do so.

"The book is available online," Dan Michman, head of the Yad Vashem International Institute for Holocaust Research, pointed out. "Many copies are to be found. Some 12 million copies were printed in German, so it is not rare."

Israeli Dan Michman, head of the Yad Vashem International Institute for Holocaust Research, holds a copy of the Hebrew version of 'Mein Kampf' book during an interview at the Yad Vashem Holocaust Museum in Jerusalem (Photo: AFP)

But the book is also available in a shortened version in Hebrew in Israeli universities, the result of a campaign in the late 1980s by Holocaust survivor Dan Yaron.

'No publisher will do it'

Yaron, who died in 1999, fought for the book, totally forbidden until then, to be published in Hebrew for educational purposes.

"He said it was important for the people to know and to prevent future such events by reading what the (Nazi) leader was saying," Michman told AFP, saying Yaron approached him to publish it but there was no money at the time.

In the end, the Hebrew University of Jerusalem financed the project, and a condensed version of the rambling 720-page original is available in Israeli universities and research institutes.

The taboo status of "Mein Kampf" is special among anti-Semitic writings, said Meir Litvak, an expert on Holocaust texts.

"The Protocols of the Elders of Zion" - a fictional book from the early 1900s claiming to document a Jewish plan for global domination that allegedly inspired Hitler - is available across Israel, Litvak said. "The book is common, even though it was the most popular anti-Semitic tract of the 20th century."

For "Mein Kampf," however, "there is an emotional rejection," he said. "No publisher will do it."

Michman was involved in drafting the 3,500 explanatory notes for the annotated German reprint, expected out in the coming days, and the book will remain outlawed if it is not contextualised.

Michman said it is positive to put the book in a wider context. "It will include a lot of issues around the text – where Hitler took his ideas from (and) when he suggests something it explains if and how it was translated into deeds."