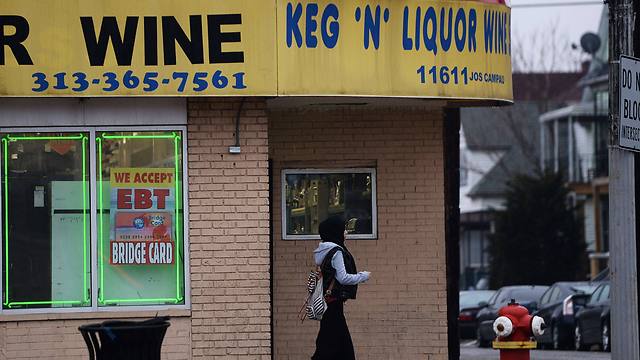 More Muslims than Jews in the US by 2040, study says

Currently around 3.3 million Muslims live in the US, making up one percent of the total population, and their population is growing faster than the Jewish one.

The Muslim population in the United States is growing at a faster rate than the Jewish population, meaning that Muslims will become the second-largest religious group in the country before 2040, according to the Pew Research Center.

The Washington-based think tank findings are part a demographic projection of religious groups in the United States, which found that between 2010 and 2015 over half of the estimated growth of the Muslim population was the result of immigration.

A Muslim girl makes her way along a street in Hamtramck, Michigan (Photo: AFP)

Due to an increase in immigration and higher birthrates, the Muslim share of the population is expected to rise to 2.1 percent in 2050, the report found.

According to the Pew Research Center, there are currently around 3.3 million Muslims living in the US, making up one percent of the total population.

There are an estimated 5.7 million "Jews by religion" currently living in America, 1.8 percent of the total population.

The US Census Bureau does not ask questions about religion, meaning that there is no official government breakdown of the American population by religious affiliation.

A Muslim man delivers "Azan" - the call to prayer - over loudspeakers before their weekly Friday noon special prayer at the Al-Islah Islamic Center Mosque in Hamtramck, Michigan (Photo: AFP)

“There has been little net change in the size of the American Muslim population in recent years due to conversion,” the Pew Research Center said. "About one-in-five American Muslim adults were raised in a different faith or none at all. At the same time, a similar number of people who were raised Muslim no longer identify with the faith.”

"In some cities Muslims comprise significantly more than 1% of the community. And even at the state level Muslims are not evenly distributed: Certain states, such as New Jersey, have two or three times as many Muslim adults per capita as the national average," the report said.

According to a previous report, Muslims are the fastest-growing religious group in the world. "The growth and regional migration of Muslims, combined with the ongoing impact of the Islamic State in Iraq and Syria (ISIS) and other extremist groups that commit acts of violence in the name of Islam, have brought Muslims and the Islamic faith to the forefront of the political debate in many countries," the report stated. "Yet many facts about Muslims are not well known in some of these places, and most Americans – who live in a country with a relatively small Muslim population – say they know little or nothing about Islam."

There were 1.6 billion Muslims in the world as of 2010 – roughly 23% of the global population, according to a Pew Research Center estimate.

However, while Islam is currently the world’s second-largest religion, after Christianity, it is the fastest-growing major religion. According to Pew Research Center estimates, if current demographic trends continue, the number of Muslims is expected to exceed the number of Christians by the end of this century.