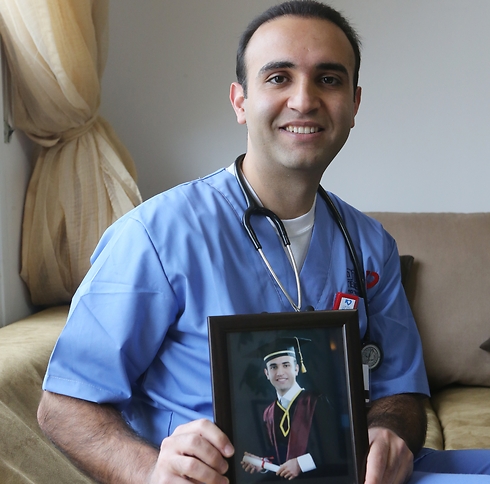 From the Iranian army to a Jerusalem clinic

Dr. Shahab Davidfor served as a doctor in the Iranian army, made aliyah 2 years ago and is now working in a Romema clinic: he says the Iranian people want to make peace with Israel.

Dr. Shahab Davidfor, a 32-year-old Iranian Jew, always wanted to be a doctor.

After graduating from high school in Isfahan, Iran, he studied medicine and at the end of his internship he joined the Iranian army, serving for a year and a half. Iran is a very religious country and not a great lover of Israel, to say the least, but it turns out that the Davidfor family lives in peace with its Muslim neighbors. "The people there are very nice. Most of my friends are Muslims. However, every now and then there were those who called us dirty Jews," he recounted.

Four years ago he received a draft notice and was assigned to be a doctor at an Iranian Air Force base. The Iranians knew that his older sisters made aliyah to Israel 25 years ago, but that did not bother them. "For a year and a half I treated patients at the clinic there," said Shahab.

"They knew I was a Jew, and from time to time I would undergo investigations to make sure I was not a spy and not passing secrets to Israel," he said. "Once they even sent me to be interviewed by members of the Revolutionary Guards, and they asked me about my family in Israel and my relationship with them, but after their investigation they allowed me to continue working."

Shahab stated that the Iranian people are actually interested in making peace with Israel. "No one there believes leaders who say they want to attack Israel," he said. "Contrary to what leaders of both countries say, people want peace and to live their lives quietly." In recent years, he and his family felt the effects of the economic sanctions imposed on Iran due to its nuclear program. "People in the lower economic brackets were actually hungry for bread. It was precisely those in power who remained very rich and did not feel the economic impact," Shahab imparted. Two years ago he made aliyah via Turkey. "We packed our things and went to Israel. We didn't have to hide it. Those in power knew about our aliyah. When we arrived, I decided to live in Jerusalem and began to study for licensing tests in order to be able to practice in Israel. I failed the first test due to my difficulties with the language, but I passed the second test", he related.

A week ago, he was hired by the Terem clinic in Romema, Jerusalem. He said that he was overwhelmed on the first day but he learned to get along and the doctors, nurses and patients helped him acclimate.

He misses Iran."I have many friends there, and we talk on Skype. Unfortunately I can't go back for a visit. If they catch me I could executed, so I guess I'll pass on that. I'll wait for there to be peace," concluded Dr. Davidfor.