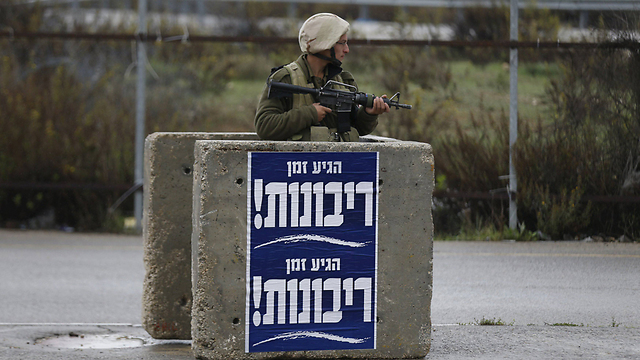 Welcome to the state of walls and barricades

Op-ed: Netanyahu is a sober leader who believes there's no solution to the conflict unless an app is found that could make the Palestinians disappear. Until then, he says no to a diplomatic process, separation, or annexation - and yes to entrenchment.

Those asking themselves what we're going to do about the current series of terror attacks can take comfort in the fact that a solution has been found. We will not be able to see the ressults in the short term, but there's something to look forward to.

A community that has suffered a terror attack will get the fences around it upgraded, the bus stops will be protected with concrete barriers, cafés and restaurants will have increased security, and soldiers will lie in ambush on roads prone to attacks.

Those looking for an example of where we're heading could stop at the gas station on Route 433, where IDF soldier Ziv Mizrahi was murdered two months ago. The gas station is surrounded by a fence, a watch tower has been erected inside, and soldiers are patrolling around it. A civilian gas station in military fatigues.

A lot has changed since the bloody attacks of the 1930s, which led to the establishment of the wall and tower settlements, but it appears the conspiracy is making a comeback. We barricade ourselves in and accept these defense measures meant to protect our lives with understanding. And as part of this entrenchment, which is turning from a tactic to second nature, the majority develops apathy and indifference towards the human rights of anyone who is not part of our milieu.

Wall and tower settlement in Kfar Glikson (Photo: Archive)
Netanyahu may have condemned Im Tirtzu's "plants" campaign, but in the same breath also vilified Breaking the Silence and those who support it. He knows the incited mob only hears the end of a sentence that includes the word "IDF." And in the kind of eve of war atmosphere prevalent these days, Netanyahu is counting on those Israeli citizens who tend to view freedom of expression and human rights as luxuries enjoyed only in countries like Switzerland. Those citizens, who are the majority according to the prime minister, accept the shrinking of democracy with understanding.

The culture and education ministers, who have been taking up quite a chunk of the media attention since the government was formed, each serve Netanyahu in their own way. According to chaos theory, small changes can lead to big changes. On the one hand, their extremism hasn't stuck to Netanyahu, while on the other hand they contribute as one to the creation of a butterfly effect that bolsters the prime minister. If Netanyahu wasn't disgusted by Bennett, he would give him the "Most Zionist Minister" award.

Stagnation
Somewhere between repression, denial, and despair
Shimon Shiffer
Op-ed: Israel's leaders, from left and right, refuse to take action. Sticking in place seems to aid them in preserving their interests, while Israel and its citizenry sink deeper into the diplomatic quicksand.
Somewhere between repression, denial, and despair

With his determination, Bennett plants the seeds for the creation of the new Sabra. The children who will study with the updated civics textbook, first initiated by the ever-more-observant ideologist Gideon Sa'ar, will learn that their secular parents are people lacking in faith, they'll get closely acquainted with right-wing political views, and won't consider the delegitimization of other views to be a problem. They will learn that Israeli Arabs are second-class citizens, will accept with understanding that at times, in order to resolve a dispute, the majority can ignore the rights of the minority, and most importantly they'll know how to quote from the Jewish texts.

ISIS and radical Islam were supposed to help further bolster Netanyahu's thesis of stagnation and entrenchment. When the prime minister of Israel marched shoulder to shoulder with the president of France and the leaders of the free world after the murders at Charlie Hebdo, he was sure the world could see, as he does, that Abbas is hiding his ISIS T-shirt under his coat. But now, France is giving Israel an ultimatum to return to the negotiating table with the Palestinians, otherwise France will recognize the Palestinian state.

Netanyahu in Paris marching against terror with leaders of the Western world (Photo: Reuters)
France, which has suffered a severe beating from Islamic terrorism, more than any other Western country, is not buying the thesis Netanyahu was able to successfully sell to the citizens of Israel. It doesn't view the Palestinian people as the partners of radical Islam, even if there are murderers from among them that are influenced by extremist incitement. According to the French diagnosis, the Palestinians are an occupied and oppressed nation. France, it appears, is not alone - but Netanyahu, as a veteran in dealing with terrorism, is not frightened by the French just as he's not frightened by Obama or the UN secretary-general. Netanyahu is a sober leader. He believes there is no solution to the Israeli-Palestinian conflict unless an app is found that could make the Palestinians disappear without it hurting them or the defenders of human rights. Until that happens, he says no to a diplomatic process, no to separation, no to annexation - and yes to entrenchment. Welcome to the wall and tower state.