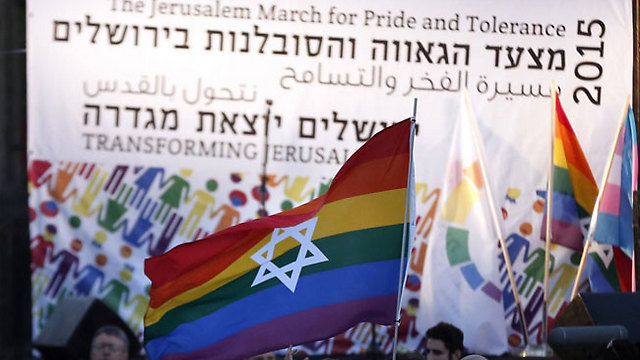 While the Health Ministry advises against 'reparative' therapy to 'reduce' homosexuality, there is no law to limit it; clients include Orthodox Jews, as well as Jewish teens from the US; 'It's exporting hatred and junk science to Israel,' says opponent.

A leading American Jewish group promoting therapy it said could turn gays to heterosexuals was ordered shut in December by a New Jersey court, amid growing efforts in the US to curb the generally discredited practice. But therapists with ties to the shuttered group say they have found a haven for their work in Israel.

The Health Ministry advises against so-called "gay conversion" or "reparative" therapy, calling it scientifically dubious and potentially dangerous, but no law limits it. In Israel, practitioners say their services are in demand, mostly by Orthodox Jewish men trying to reduce their same-sex attractions so they can marry women and raise a traditional family according to their conservative religious values.

Clients also include Jewish teenagers from the US and other countries who attend post-high school study programs at Orthodox seminaries in Israel. Half of all such students attend seminaries that require youth who admit to having homosexual feelings to see reparative therapy practitioners, according to the Yeshiva Inclusion Project, a group that counsels gay prospective students.

Jerusalem Pride Parade (Photo: AFP)
Proponents in Israel say therapy does not "convert" clients, but boosts self-esteem and masculinity, which they say can reduce homosexuality. In Israel, therapists say there is greater acceptance of their work than in the US.

"Since there is such a strong religious presence here, and I think political correctness isn't as prevalent, there's more openness about it, about this kind of therapy here," said Dr. Elan Karten, a US-trained psychologist and Orthodox Jew who has treated about 100 people with homosexual attractions since he opened his Jerusalem practice eight years ago.

Dr. Elan Karten (Photo: AP)
Some states in the US have banned such therapy for minors. JONAH, or Jews Offering New Alternatives for Healing, was shut for violating New Jersey consumer fraud laws by claiming therapy could "heal" homosexuality. An estimated 20 to 30 licensed psychologists and social workers and 50 non-licensed therapists practice some form of conversion therapy in Israel, said Rabbi Ron Yosef of the Orthodox gay organization Hod, which calls for legislation against such therapy. Gays in Israel who contacted JONAH were referred to some of these therapists.

"I'm extremely concerned," said Chaim Levin, a former client of JONAH in the US and a plaintiff in the lawsuit against it in New Jersey. "It's exporting hatred and junk science to Israel. People need to know."

Hatred at the gay pride parade in Jerusalem: Yishai Shlissel stabs participants, murdering Shira Banki (Photo: AP)
Leading medical organizations in the US say there is no proof sexual orientation change efforts are effective, and that therapy can reinforce self-hatred, depression and self-harm. The Israel Psychological Association reached similar conclusions in a 2011 position paper, which the Health Ministry adopted in late 2014. But the Association also endorsed a claim practitioners make, that "political correctness" likely prevents the funding and publication of studies examining the therapy's potential effectiveness. At least four men's support groups meet weekly in Jerusalem, said Jerusalem psychotherapist Adam Jessel, who has worked with hundreds of people looking to overcome their homosexuality. Some Israeli organizations also promote therapy.

The US group People Can Change runs a seminar in Israel, the US and Europe called Journey Into Manhood, which it says helps men "resolve unwanted homosexual attractions." About 50 men participated in a seminar last month at a confidential location in northern Israel.

Jerusalem Pride Parade (Photo: Reuters)
One 23-year-old Orthodox Jewish student from the US said the retreat "was one of the best things that have ever happened to me. I feel like I've actually started living my life instead of just surviving it." He spoke anonymously because he said publicizing his homosexuality would hurt his chances for marriage and acceptance in his Orthodox community. He said he signed a confidentiality agreement barring him from discussing seminar activities so as not to ruin the experience for future participants. But a 20-year-old Orthodox Jew from the US who attended the retreat in Israel in 2013 called some of its activities "inappropriate." He said participants were encouraged to engage in what was called "healthy touch" exercises, including one called the "motorcycle position," in which a man would sit on the floor with legs open and another would sit behind him in the same position with arms wrapped around his torso. People Can Change says such exercises are meant to desexualize touch between men.

At a follow-up support group meeting in Jerusalem facilitated by a Journey Into Manhood volunteer, African-style music was played, and men were blindfolded and told to strip if they wished, he said. The facilitator, speaking anonymously because he said his group sessions are confidential, said the exercise was designed to help men become comfortable with themselves without others seeing them and that some participants removed only their shirts.

Hatred at the gay pride parade in Jerusalem: Right-wing organization Lehava protesting against the parade (Photo: GettyImages)
"I look back on it with horror," the participant said of his years in reparative therapy. At the time, he said, group activities gave him a supportive community, but therapists led him to believe something was wrong with him, which he now rejects. He spoke on condition of anonymity because he said his father, an Orthodox rabbi, would face controversy if his son publicly identified as gay. In recent years, organizations of gay Orthodox Jews have formed in Israel, advocating acceptance of homosexuality and rallying against conversion therapies. Today, many rabbis in Israel shun the therapies and fewer gays seek them, Yosef of Hod said. Neta Patrick, a lawyer, co-authored a forthcoming legal article to encourage litigation in Israel against the practice. She believes there are grounds to strip professionals of their licenses if they do not educate clients about the Israeli government positions on the therapy. Karten says he tells patients he cannot guarantee therapy will succeed, but that it is not a routine part of his therapy to discuss with them the government positions. "Let's say someone's coming to me, and they're religious. They could open the position statement of the Israel Psychological Association, or they could open the Torah," he said. "They're going to probably look at what the IPA says and say, 'That's nice, but I still have this to contend with. I have dreams to be a father and a husband.'" Karten pointed to a drawer in his office where he keeps wedding invitations from former clients - "a handful," he said.