Troops at the Focus checkpoint after terror attack there
Photo: Ehud Amitan 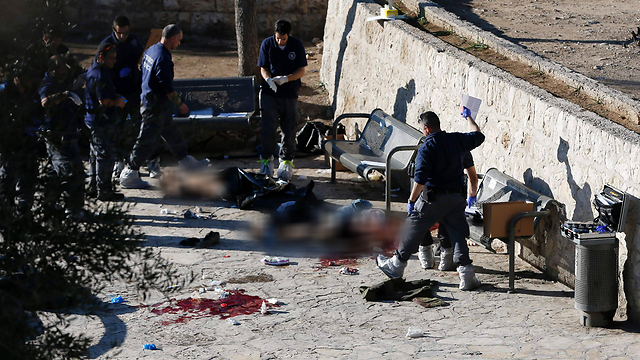 Analysis: 31 have been murdered in the current round of violence - and the efforts to change this trend haven't been enough so far. The government decided not to return bodies of terrorists - and some were returned. Closures were imposed over cities and towns - but most were only partial. What other measures were implemented, and which turned out to be a farce?

Dozens of fighters from the elite Duvdevan unit reinforced their friends in the Judea and Samaria Division on the night between Wednesday and Thursday, while the Menashe Territorial Brigade's troops set up roadblocks as part of the hermetic closure of the town of Qabatiya, and law enforcement authorities have been working to speed up the demolitions of terrorists' homes.

These are the immediate measures decided on by the government, led by Prime Minister Benjamin Netanyahu and Defense Minister Moshe Ya'alon, in response to the terror attack that claimed the life of Border Policewoman Hadar Cohen. As the current escalation of violence enters its fifth month, however, it appears that the defense establishment has yet to find the formula to stopping the attacks, which claimed the lives of 31 people.

Scene of the combined terror attack at the Damascus Gate in Jerusalem (Photo: AFP)

IDF Intelligence and the Shin Bet's intelligence effort has been producing warnings about impending terror attacks, including over the last few days, and the fighters on the ground are being deployed to main roads and flashpoints, arresting hundreds of Palestinian suspects every month.

The Palestinian security forces are also contributing to the effort by maintaining the security coordination and thwarting terror attacks against Israel. And yet - the government has no good solution to this new type of "grassroots terrorism," which is far from the known terror organizations. "Calming intervention could prevent escalation, like economic steps for example," IDF officials said last week, in what could be seen as a statement that military measures alone cannot stop the violence.

Border Policewomen in Jerusalem (Photo: AFP)
Since the murder of the Henkin couple near Nablus on October 1, 2015, the top echelons of the government and defense establishment convened several times, and made a series of decisions that seem more like a recycled collection. The decisions the Prime Minister's Office reports to journalists via text messages, such as imposing a partial closure on a small village or the intention to demolish terrorists' homes, were, until 2005, the exclusive domain of middle-ranked officers in the West Bank like a battalion commander or a brigade commander. These are the main decisions made by the government so far:

At the height of the escalation, the government made a controversial decision, which raised objections from the top echelons of the defense establishment - keeping terrorists' bodies in Israel to serve as punishment and deterrence, and in an effort to avoid having funeral processions turn into a rally of incitement with calls for revenge against Israel.

Funeral procession for terrorist Mutaz Ahmad Awisat.
Some of the pallbearers at terrorists' funerals have turned into terrorists themselves several days later. But, eventually, very quietly, the political ranks folded on this measure and dozens of terrorists' bodies have been returned to the Palestinians in recent weeks.

You would be hard pressed to find a senior officer in the IDF's Central Command who supports collective punishment to the Palestinian population, mostly in the current climate, and the statements made by top IDF officers assert that the freedom of movement for Palestinians should continue on shared roads in the West Bank, like on Highway 60.

The government's decision at the beginning of this escalation to impose a closure on the village or city a terrorist came from has been implemented slowly, partially, temporarily and in an inconsistent manner.

Soldiers checking IDs at the exit from Ramallah (Photo: EPA)
The city of Nablus, for example, produced some of the terrorists responsible for terror attacks in Jerusalem, or the Tapuach Junction area, but there was no closure on it after the attacks.

The Highway 60 entrance to the village of Beit Ummar, north of Hebron, was closed for a few days, in what the media called a "closure" - in line with a statement from the prime minister - of the village of a terrorist who ran over soldiers. The rest of the entrances to the village were left open, and the closure was partial at best.

Line of cars waiting to enter Ramallah during Israeli closure (Photo: AFP)
A partial closure, for only a few days, was also imposed on the small village of Beit Ur al-Tahta at the foot of Route 443, where the terrorists who infiltrated Beit Horon last week came from. And the "flexible" closure of Ramallah earlier this week after the attack at the Focus checkpoint near Beit El only lasted about 10 hours. After a series of attempted attacks at the Jalamah checkpoint in the Samaria region, right at the beginning of the current escalation, the IDF closed the checkpoint, which is a critical economic artery for the area.

The business owners of Qabatiya, one of the most violent towns in the West Bank, stopped the youth from leaving the village to commit terror attacks themselves. This "success" led the people of the village of Sa'ir in the Hebron area to seek advice from their friends in Qabatiya on how to stop the local youth from going out to commit attacks - because of the Israeli sanction that limited the movement of the village's residents.

Clashes in Qabatiya (Photo: AFP)
Nonetheless, on Thursday, a full, hermetic closure was imposed on Qabatiya, where the three terrorists who committed the Wednesday attack in Jerusalem came from. The decision on imposing a partial closure should be under the jurisdiction of the IDF commanders in the different areas, at their discretion, so the military could, for example, close off the entry to Hebron for Palestinians based on security needs, even if a terrorist hasn't come out of the city at that time.

Public Security Minister Gilard Erdan tried to promote the expulsion of terrorists' families to Gaza as deterrence, but was met with firm objections from both former attorney general Yehuda Weinstein, and new AG Mandelblit, who said the move was illegal.

Three Palestinians with permits to stay or work in Israel have committed attacks over the past few months, in what has been defined the "red scenario" at the Civil Administration in the West Bank that produce these permits. It was only after the terror attack at the Panorama building in southern Tel Aviv that the decision was made to temporarily freeze 1,200 permits given to Palestinians from Hebron.

The terrorist from the Panorama building attack had a work permit (Photos: ZAKA, Motti Kimchi)

In an informal manner, Palestinians with work permits were barred for only a few days from entering the settlements or the industrial areas in the West Bank after attacks in the area.

IDF Chief of Staff Gadi Eizenkot mentioned in his speech at the Institute for National Security Studies (INSS) two weeks ago that the fact over 100,000 Palestinians work for Israelis, supporting hundreds of thousands of families, is important to Israel's interests and to its security. On Thursday, the Coordinator of Government Activities in the Territories (COGAT) decided for the first time to freeze trade and work permits of the extended families of the three terrorists from Qabatiya, likely temporarily.

Three reinforcement battalions are operating in the West Bank since the beginning of the escalation in the fall, in what seems to be one of the more effective moves taken - there is less rioting and clashes every month, and the clashes that do take place are mostly on Fridays at flashpoints.

The permanent presence of fighters along the main roads, at junctions and at flashpoints, deters terrorists or creates a barrier between terrorists and civilians. In most of the cases over the past two months, the attacks were foiled without any Israelis hurt thanks to the high level of skill and vigilance of the troops.

In addition, over 1,200 Palestinians have been arrested by IDF forces since the beginning of the escalation in a series of nighttime raids targeting the main instigators of riots, including minors. This policy really disrupts the ability of inciting figures in the West Bank to lead violent protests in towns and cities.

One of the biggest farces among the government's decisions is the decision to demolish terrorists' homes. This controversial move is also done slowly, even after the government decided several months ago to accelerate the demolition of the homes to further bolster deterrence. A decade ago, an IDF committee raised great doubts over the efficacy of such a move, which did not stop the government from adopting it enthusiastically over the past six months. But, in reality, despite measurements made of terrorists' homes and the handing out of advance notices before demolition, the great majority of the dozens of homes of terrorists who murdered or wounded Israelis over the past few months - remain standing. New AG Avichai Mandelblit's instructions on the topic could accelerate the process, but until then the Palestinian Authority provides the terrorists' families with new homes, furniture and all, while Israel takes its time on the demolition.

Erdan also worked to change the rules of engagement so that now, police forces can use a Ruger 10/22 non-lethal rifle when faced with stone and Molotov cocktail-throwers. He also eased the conditions to receive a license to carry arms, and some 15,000 requests for such licenses have been received so far, compared to 3,000 during the same period of time last year.

The Yamam (police's counter-terrorism unit) and Special Forces are operating in the heart of the Arab neighborhoods and villages in East Jerusalem to arrest terror suspects. At the same time, mission-based headquarters that were dismantled in Jerusalem in the past have been formed anew, and police is entering sensitive areas of East Jerusalem that it was barred from entering in the past.

Erdan and the government also promoted legislation for mandatory minimum punishments to anyone who participates in any violent activity, including the throwing of stones and Molotov cocktails. The Public Security Ministry is also working to increase the monitoring of social media in an effort to identify terrorists and inciters in advance. Moran Azulay contributed to this report.