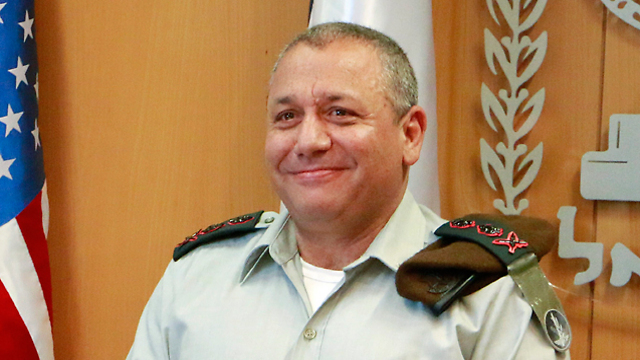 Op-ed: IDF Chief of Staff Gadi Eisenkot is only a quarter of the way through his tenure, yet is making his mark as a moral and professional leader of the IDF

After one year in his position as IDF Chief of Staff, we can determine that Gadi Eisenkot is the anchor of security and the leading moral figure amongst the instability of the country's leadership.

Little by little Eisenkot is revealing his strategic security positions to the public: Nuclear Iran is "out" while Hamas and Hezbollah are "in," alongside opposition to the closure of the West Bank for fear it will promote attacks.

On Wednesday, as he was speaking to students at a high school in Bat Yam, he spoke of the moral and tactical aspects of the IDF and said that "there is no reason to empty a magazine into a 13 year old girl with scissors- we must follow the IDF rules of engagement."

It seems the Chief of Staff has become a leader in setting strict rules of engagement. For example, when hundreds of protesters crossed the Gaza border fence, it was Eisenkot who ordered that they be stopped, but without leaving dozens of bodies lying on the ground, even at the price of infiltration of the fence, as this is an area far from Israeli communities.

Although it is impossible to conclude that he did not order the cessation of the protest through riot control measures or snipers, the head of the Gaza division alleged that the pictures of bodies near the fence would have caused a lot more damage to Israel than an infiltration of the fence itself.

Eisenkot understands the place of the military in a democratic country, but behind closed doors he doesn’t spare the decision makers his opinions, and he doesn’t hide the significance of their actions, even if he receives sour faces in return.

Eisenkot doesn’t care if they like him as he has no political aspirations . We also certainly won't see him toy with the idea, nor try to gain favor in the eyes of politicians - not on the suggestion to close Israel Army Radio, not on taking Jewish awareness away from the hands of the IDF rabbinate, and not throwing criticism at the organization Breaking the Silence, who he suggested bring their complaints in real time to their commanders, and not years after the fact in lectures from outside the country

IDF Chief of Staff Gadi Eisencott with US Chairman of the Joint Chiefs of Staff Joseph Dunford (Photo:Yariv Katz)

A year after he started his position, it is clear that Eisenkot doesn’t give breaks to anybody. Following the tragic death of Nahal Brigade officer Yishai Rosales during a training exercise, the heads of no less than six officers and commanders rolled, including the armored battalion commander and his deputy, and four additional officers who were given demerits and reprimands.

All of this is due to how the Chief of Staff himself views his position. When the teenagers at the Bat Yam high school asked him if his position is difficult, he was driven to tell them that what is really difficult is to "go to the house of a bereaved family."

When we at Yediot Ahronot exposed the real problems between the military and draftees, he didn’t attempt to sidestep the issue. Instead, he acknowledged the problem, and held a discussion during his general meeting where he demanded answers from the Head of the IDF Manpower Directorate and the head of Military Intelligence, and demanded not only solutions to the problem, but also timelines for when the problems would be fixed.

With a quarter of his tenure already over, the Chief of Staff has demonstrated to the military that there is a leader, and there is a path forward. If he can continue to leave his moral mark on the IDF, as he has been doing until now, we can expect that when he takes off his uniform in three years, he will leave behind not only a more professional military, but a more moral one too