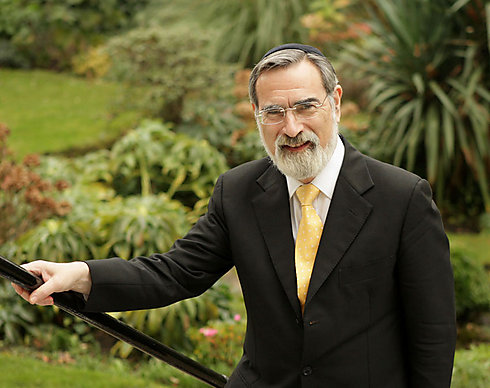 The Templeton Foundation has awarded Rabbi Lord Jonathan Sacks, who served as chief rabbi of the United Hebrew Congregations of the Commonwealth, the Templeton prize, a prestigious award granted to an individual who "has made an exceptional contribution to affirming life's spiritual dimension, whether through insight, discovery, or practical works." Rabbi Sacks is also set to receive $1.5 million.

The British Rabbi Sacks is a theologian, a lecturer, a prolific writer, and holds three different honorifics - doctor, lord, and rabbi. He completed his service as chief rabbi three years ago.

He is to receive the Templeton Prize in May for his contribution to modern religious discourse through his many books and lectures.

At a press conference at the British Academy in London on Wednesday, Jennifer Simpson, a member of the Templeton Foundation's board of trustees and granddaughter of John Templeton, said: "After 9/11, Rabbi Sacks saw the need for a response to the challenge posed by radicalization and extremism and he did so with dignity and grace."

Simpson added: “He has always been ahead of his time and, thanks to his leadership, the world can look to the future with hope, something we are very much in need of right now."

She also lauded Sacks for how he “built a network of organizations that introduced a Jewish focus in areas including business, women’s issues and education, and urged British Jewry to turn outward to share the ethics of their faith with the broader community.”  Rabbi Sacks joins a list of 45 Templeton Prize winners. In his most recent book, "Not in God's Name", which argues against religiously motivated violence, he writes: "Too often in the history of religion, people have killed in the name of the God of life, waged war in the name of the God of peace, hated in the name of the God of love and practiced cruelty in the name of the God of compassion. When this happens, God speaks, sometimes in a still, small voice almost inaudible beneath the clamor of those claiming to speak on his behalf. What he says at such times is ‘Not in My Name." At the press conference, he dedicated part of his speech to religious violence, saying that secularization has left a vacuum filled by religious fundamentalism.  Rabbi Sacks said greater efforts need to be undertaken to address violence. "A message of love as powerful as the message being delivered by the preachers of hate" can effectively counter violence. He added that the message "really has to speak to young people and we have to use the same social networking, the same technology as the extremists and we've got to do it as well and better than they do." He further said that "religion, or more precisely, religions, should have a voice in the public conversation within the societies of the West, as to how to live, how to construct a social order, how to enhance human dignity, honor human life, and indeed protect life as a whole…Each religion, and each strand within each religion, will have to undertake this work, because if religion is not part of the solution it will assuredly be a large part of the problem as voices become ever more strident, and religious extremists ever more violent." The Templeton Prize selection committee is comprised of researchers and religious leaders including Christians, Buddhists, Jews, Muslims, and Atheists.