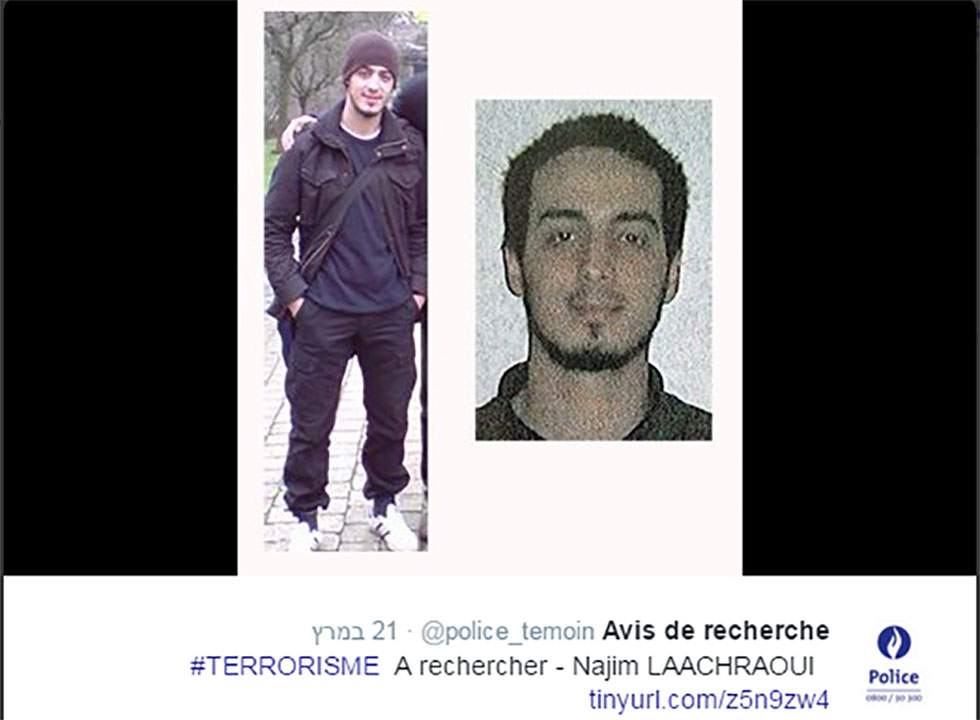 The terrorists who carried out the attack at Brussels airport were Khalid and Brahim El Bakraoui, already known to Belgian authorities; third terrorist, Najim Laachraoui, 25, tied to the Paris attacks in November 2015 remains at large.

The two suicide bombers who committed the attack at Brussels airport Tuesday morning were brothers, Khalid and Brahim El Bakraoui, who were known to authorities, according to Belgian RTBF TV.

Khalid rented an apartment in the Brussels suburb of Forest under a false name. RTBF stated that it was in Forest that an armed man was killed in one of the Belgian security forces operations recently.

The third terrorist visible on the CCTV picture, Najim Laachraoui, 25, who fled the airport leaving behind him an unexploded bomb, remains at large. Laachraoui is believed to have made the suicide vests used in the Paris attacks, a French police official told The Associated Press, adding that Laachraoui's DNA was found on all of the vests as well as in a Brussels apartment where they were made. The official spoke on condition of anonymity because he was not authorized to discuss an ongoing investigation.

The wanted notice put out for Najim Laachraoui

Authorities earlier released a grainy picture of the same man alongside two men with dark hair in dark clothes who were also pushing trollies with similar bags.

Both of those men wore black gloves on their left hands.

Police helicopter in manhunt for terrorist at large
Two American officials told CNN that the information that led to the raid on the house northeast of Brussels, was provided by a taxi driver who drove the terrorists to the airport.

The taxi driver turned to authorities after having seen the images of the security camera. VRT Belgian TV reported that the terrorists wanted to bring five suitcases but in the end were forced to bring only three as the taxi was too small.

Armed with the taxi driver’s information Belgian security forces raided the house, and found a bomb, chemicals and an ISIS flag.

The mayor of Zaventem, where the international airport is located, said that the terrorists “came in a taxi with their suitcases, their bombs were in their bags.

"They put their suitcases on trolleys, the first two bombs exploded. The third also put his on a trolley but he must have panicked, it didn't explode," he added.

It was this case that bomb disposal experts blew up later, he added.