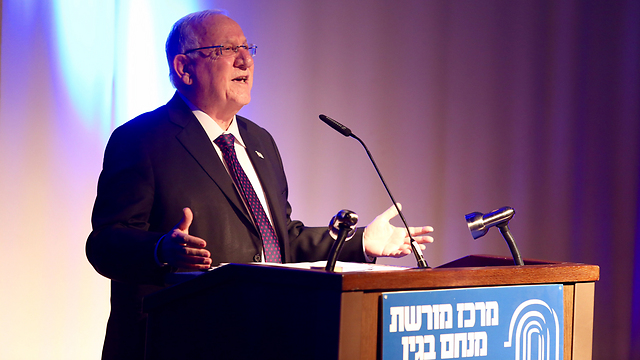 Op-ed: President Rivlin argues that while criticism of Israel is fair, when it comes under the guise of BDS and used as a camouflage for anti-Semitism, it crosses a line. Israel must stand together in order to overcome the BDS threat.

Since its establishment in this hostile region, Israel has had to heal with geo-political isolation.

In order to compensate for this isolation, throughout the generations, Israel's leadership signed a number of strategic alliances with Western powers. These alliances not only guaranteed Israel's military supremacy, but also ensured the free flow of Israeli culture, trade, and science to the most advanced countries in the world. These friendships and alliances with the West are a large part of the reason that Israel is as strong, prosperous, and advanced as it is today.

Yet there are those who look at these strong alliances, and yearn - for one reason or another - to isolate Israel and to weaken its standing internationally. The BDS movement includes many factions and parts, some of which have nothing to do with one another. I'm sorry to say that some parts of BDS even include factions which are connected to enemies of the State of Israel, and who work in order to eradicate Israel as a Jewish state. Some of them are even worse, and hide their anti-Semitism by calling their actions "criticism of Israeli policy."

Israeli President Reuven Rivlin (Photo:Gil Yohanan)
Yet it's important to clarify – not all criticism of Israel is anti-Semitism, and not all international pressure on Israel is a boycott. Criticism comes of concern and even the necessity to keep Israel strong. When friendly countries criticize us, I quite often find this criticism to be unjustified, but as a man who loves the Land of Israel, I don't think that everyone who criticizes Israel - for instance on the matter of Judaea and Samaria - is causing de-legitimization to Israel.

Anti-Semitism and anti-Israelism are the complete opposite of criticism – they use criticism in order to reject the right of the State of Israel to exist and to reject the Jewish people's right have their own state. I'm sorry to say that not even the West is immune to these positions. History proves that the dark and ugly scourge of anti-Semitism can spring up anywhere, even in the enlightened strongholds of Europe.

The BDS movement, as a movement which rejects Israel's existence, has on multiple occasions spread modern-day blood libels. It doesn't advance peace, but hatred. It is our responsibility to take apart this organization. The subject of boycott has always been a central issue in my work - as Speaker of the Knesset, and, of course, as President. I hear with concern about the damage, both visible and hidden, from academics, settlement leaders, athletes, and industrialists. At the same time, I sit and I stress to all the leaders and intellectuals I meet how dangerous the boycott is. I also stress and clarify – we are a nation familiar with debates and argumenets, a nation in which dealing with controversy and criticism is a central part of its existence. But boycott, by its very definition, is not part of debate – it silences debate.

'Anti-Semitism and anti-Israelism are the oppposite of criticism' (Photo: Mark Neiman)
Don't let boycotts – as I always tell world leaders – change the lively and open discussion. Boycotts, violence, and incitement only deepen divides, and don't bring us any closer to a solution. When BDS takes over, criticism turns into camouflage for the de-legitimization of the existence of the State of Israel. We are putting our full effort into this fight. BDS isn't a threat which only exists at this moment, and its damage to the Israeli economy and Israeli security is still marginal. Nevertheless, we will not allow BDS to erode and denigrate the Israeli brand or the internal values of our society. Once we understand how to prove this to ourselves - while staying consistent with our values and identity - we will be able to prove this to the entire world, and BDS will no longer exist.