The woman on the demolished building.
Photo: Shorouk Tabet Abu-Kaff 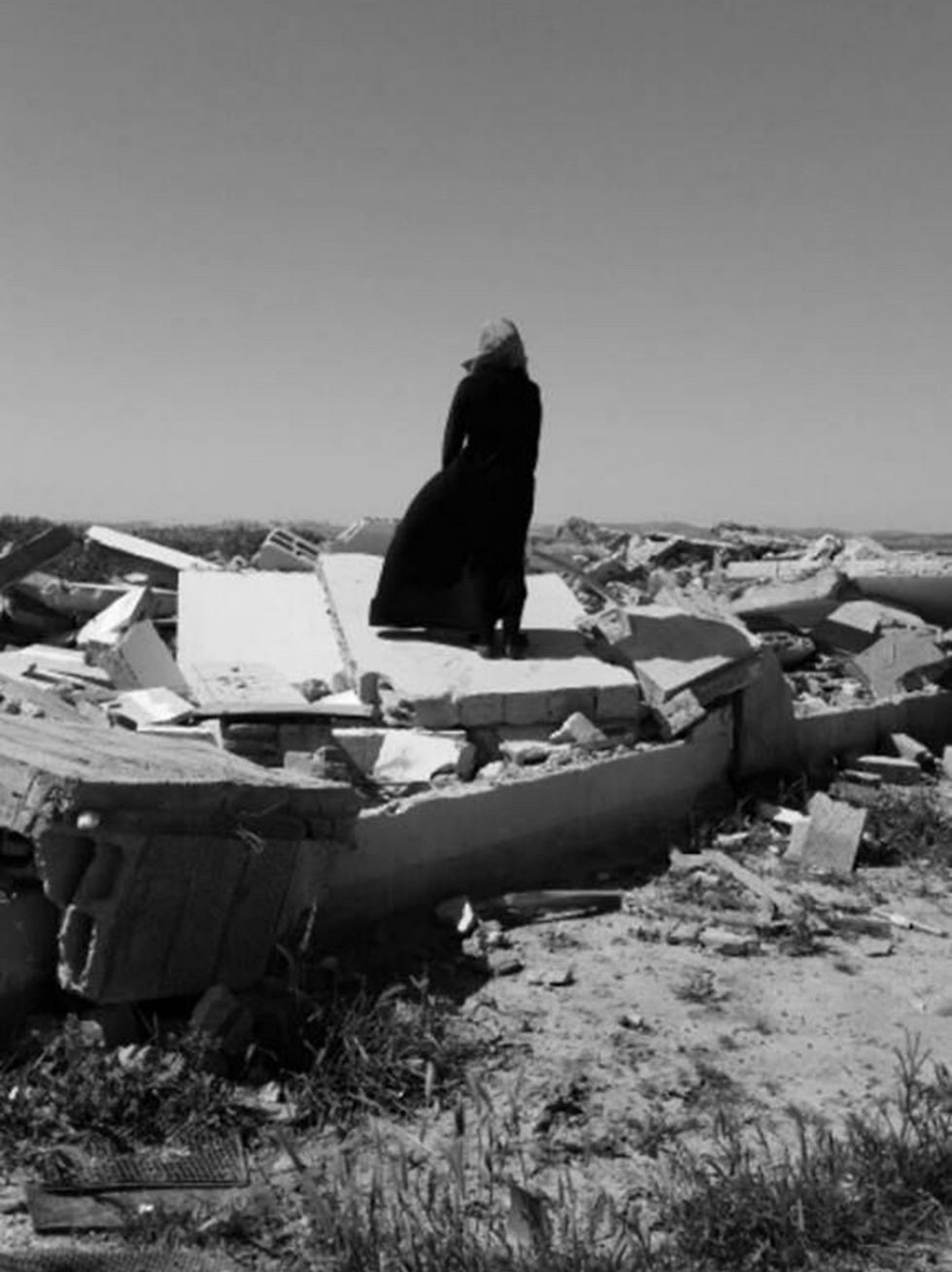 13 Israeli high school students are showcasing the photos they took as part of an initiative by the US Embassy in Israel. They attempted to use their cameras to protest home demolitions, the IDF’s supposed lack of respect for nature, discrimination against women, and more.

Women’s rights, the separation fence, and the issue of unrecognized Bedouin villages in the Negev region are all part of a recent photo exhibit at the Jaffa port, entitled The Community and Me. The photos were taken by 13 high school students from across Israel, and are part of an English-language-learning initiative by the Embassy of the United States in Israel.

Dozens of high school students from across the country applied to take part in the exhibit, which is pary of an international photography festival. Thirteen works were eventually chosen. Students from Baqa al-Gharbiyye, Ramla, Tel Sheva, Kuseife, Umm al-Fahm, and Beit Shemesh were asked to document significant events in their lives as part of an English-language-learning project helmed by the US Embassy. The students visited workshops and photo exhibits in preparation for their possible participation in the project.

Julie Fisher, wife of US Ambassador Dan Shapiro, handed certificates of appreciation to the winning photographers and described how the people behind the project discovered that the teenage participants were highly opinionated and eager to express themselves.

Along with cultural photos of people praying in a mosque or preparing coffee, some of the photos showed criticism of their complex lives. Shorouk Tabet Abu-Kaff, 16, a tenth-grader from Umm Batin, focused on demolition of homes in Bedouin towns by taking a photo of a woman standing on the rubble. "Our reality is very bad," he wrote in his explanation of the photograph. "We can't build houses. If we construct one building, they destroy it immediately (presumably due to the Bedouin community’s long-standing land disputes with the Israeli government over Negev land ownership —ed.). If we don't have houses, how can our children live better lives? We hope that, in the future, it will be better."

Ayman al-Jalal, a 17-year-old twelfth grader from Tel Sheva, criticized the IDF’s use of Negev territory for its military drills. His photo shows a man urinating on a concrete cube to which a sign is attached, declaring a nearby area closed due to IDF live fire drills. Al-Jalal wrote, "The driver stopped to urinate, and he did it on the sign. I was scared because the sign belongs to the army. This scene reflects the army's contempt for nature. A thousand signs like this appear throughout the Negev and restrict its residents' freedom of movement.

Balgaz Hussein Abu-Kaff, a 16-year-old tenth grader from Umm Batin, took a photo of a female student behind a locked gate, trying to express the hardships Bedouin women experience. She wrote, "Most Bedouins don’t allow their girls to attend school, even though they're very smart. Our fathers only think of family honor and are still worried about that all the time They let the boys do whatever they want! I'm tired of this! I'm a smart girl, and I don't want my community to prevent me from learning. I'm just trying to say, 'Where's the justice in the life of Bedouin girls?'"

The locked door and the Bedouin woman. (Photo: Ibtisam Abu-Kaff)

Ibtisam Abu-Kaff, a 16-year-old high school student from Umm Batin, also protested the way women are treated in her photo. Showcasing a Bedouin woman next to a locked door, she wrote, "Some of the women in the Bedouin community are not allowed to go outside. They leave for school and return immediately home. They aren't even allowed to buy groceries. There is always some other man who will do it for them. The closed door needs to open. The community thinks that they don't have any reason to go outside, and it isn't fair."

The Israeli-Palestinian conflict was also on display in one of the selected pieces of art. Ruba Ganaim, a 15-year-old tenth grader from Baqa al-Gharbiyye, chose to photograph in black and white the separation fence that divides her town into west and east sections. "The photograph was taken by the fence that separates Israel from the West Bank," she wrote. "The wall divides Baqa from the east. Another part was separated from the village after the war between Israel and the West Bank's inhabitants."