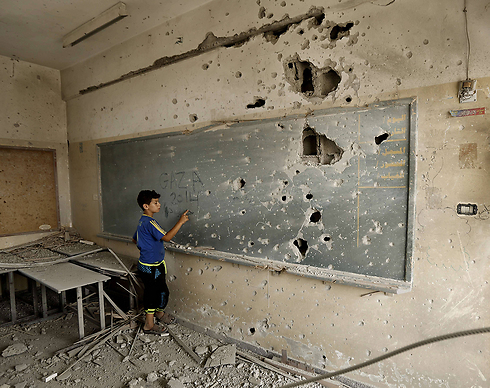 Over 650 cases a year of sexual assaults on children are reported to a Palestinian NGO; most assaults go unreported, 'hidden because of the weight of tradition and culture of shame'

Life has turned into a nightmare for Fatma’s family since her eldest son, 11, was sexually assaulted, a trauma which has damaged them all and forced them to move house.

“It started one night when our son came home late obviously very troubled,” the 30-year-old mother of seven said, speaking to AFP under an assumed name to protect the boy’s identity.

“He told me that someone from our extended family and a neighbor took him to an isolated house.

“He said, ‘They undressed me and started a pornographic video on their computer, I wanted to escape but they caught me,'” Fatma recalled, saying she immediately called the police.

Two men, in their twenties, were arrested.

Fatma’s family is one of the rare victims who speak out on a taboo issue in the conservative Gaza Strip and to bring the case to court. “Even though they are part of the family, I asked for the death penalty,” she said.

But while one of the suspects was jailed, the other was quickly released. And she said the family quickly hit a wall of shame and silence. “The school counsellor who was asked about my son’s behavioral problems was ashamed to talk about the real reasons, blaming family disagreements.” The damage for the whole family has been irreparable.

“We spent all our money moving house. I’ve suffered a lot and I got sick and all my children were affected indirectly,” she said at a Gaza support unit run by the Palestinian Center for Democracy and Conflict Resolution (PCDCR).

The shelter is a rare haven for victims of sex crimes and their families in the crowded Palestinian enclave. Asma Saud, a psychological support staffer at the center, said the few children who come there are just the tip of the iceberg.

Sexual assaults like these, she explained, are “present but hidden because of the weight of tradition and culture of shame.”

Gazan society, in which tradition has always played a major role, has turned in on itself further since the Islamist movement Hamas won 2006 elections and took sole control of the territory the next year after deadly clashes with the rival secular Fatah.

One morning, while the disabled son of another woman was waiting for the school bus, “a neighbor attracted him by offering him money then cornered and sexually assaulted him,” Nadia told AFP. “I warned the school and I got him discreetly examined by a doctor I know,” the mother said. Since then he has been “disturbed, he has withdrawn inside himself”, she said. He started lagging behind at school and has little enthusiasm for life.

Nadia, also a pseudonym, said the fear of what people will say made her wary of contacting the police. Instead she preferred to go to local elders to mediate between her family and that of the aggressor. But the attacker still lives in the same neighborhood.

According to a PCDCR study, over 75 percent of 693 abused children identified in the occupied West Bank and the Gaza Strip in two years knew their assailant.

Mahassim, 48 and a mother of eight, knows her six-year-old daughter was molested by an employee at her school. “She is still shocked and I wonder how she will be able to lead a normal life,” the mother said.

She complained but said her family had been pressured by a third party who volunteered to mediate to keep the issue out of the courts.

“He asked me to show humanity and withdraw my complaint.”

PCDCR vice president Iyad Abu Hjayer said that of the 693 cases handled by the center, only 22 families had gone to court and most eventually withdrew their complaints. Ayman al-Batniji, spokesman for the Gaza police, deplored “the fear of scandal, which in our conservative society means many families refrain from approaching the police”.

The rape of a child under 14, if proven, can lead to the death penalty under Palestinian law. Before Hamas took power, two men were executed for child rape. A 2003 law on sexual harassment calls for “between six months and one year in prison for the aggressor”, added the centre’s Abu Hjayer. He wants more support for victims, as well as tougher sentences.

Abu Hjayer also called for real sex education “in school and at home” in the Gaza Strip.

One in two inhabitants is under 18 in Gaza, where the United Nations says 300,000 children, having endured three wars with Israel since 2008 and a decade under blockade, need psychological support.