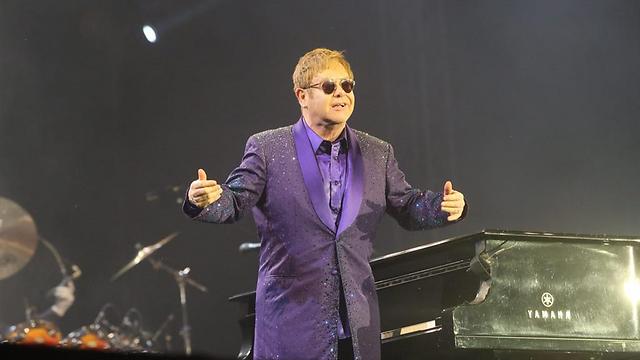 During his Thursday show, Sir Elton John managed to give a stirring and energetic performance without placating his audience, something not all artists these days tend to do

As much as Israelis love having international artists ingratiate themselves when coming to give a show, Sir Elton John’s performance on Thursday at Yarkon Park proved there are other ways to captivate the local audience.

On Thursday, the British pop icon performed some of his greatest hits in Yarkon Park as part of his world tour "Wonderful Crazy Night" (which is also the name of his latest album). The show included some of the singer's hits beginning from the 70s as well as his more contemporary songs.

The show, which spanned over two and a half hours, began rather slow. John opened with an orchestrated number, moving on to a rather standard (if not anemic) rendition of “Candle of the Wind” and a few numbers from his latest album. But then something shifted on stage, which immediately resulted in a change of atmosphere in the crowd.

The shift in vibe came when John started singing “Goodbye Yellow Brick Road,” a song that sparked a sense of nostalgia back when it first came out, while still managing to sound relevant today, 43 years after its original release.
"Bennie and the Jets"    (צילום: מתן טורקיה)
X

As he played the song, a video clip chronicling John’s life played in the background, making the performance one of the highlights of the evening. The clip showed posters from “Lion King” and “Billy Eliot”—two hit plays John composed the music to—a wedding cake with John and his husband David Furnish's likeness, and both of their children.
"Candle in the Wind"    (צילום: מתן טורקיה)
X

John’s voice, though not soaring as easily as it used to, managed to the touch the audience and sweep it up with every tone and hit of his piano’s keyboard. He drove it all home with “Circle of Life,” which he served up as his encore.

As is the norm, journalists covering the show were given the set list in advance. On it, there was no mention of “Circle of Life,” and instead it had listed the beautiful yet melancholy ballad “Sacrifice” as the closing number. In hindsight, this was a smart choice, as it ended the show with a song that is both grandiose, stirring and timeless.

Elton John’s music has managed to reach across generations, something that was quite obvious when assessing the younger audience in attendance. And yet, despite his rather frequent collaboration with more contemporary artists—who include Lady Gaga, Justin Timberlake and Eminem at the height of his fame—John has remained loyal to some of the tried-nd-true musicians who have been with him since the beginning. Among these is the incredible drummer Nigel Olsson, who shared the stage with John during his Thursday performance. All in all, the show delivered a wonderful, nostalgic and (if not crazy, then) memorable night.