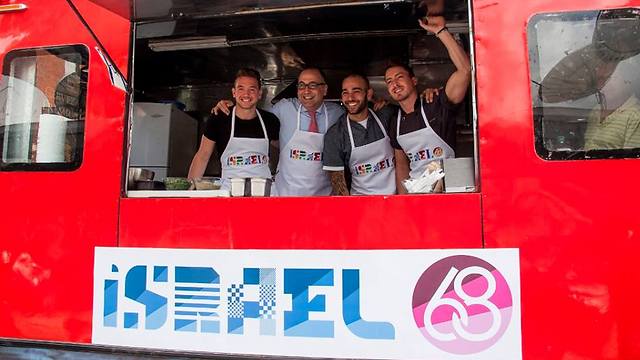 Colombians fall in love with Shakshuka

The Israeli embassy in Colombia celebrated Independence Day, handing out Shakshuka in pita to passersby, soldiers, and Jewish community members in Bogota. The Colombian press widely covered the event both in television and print, exposing Colombians to one of Israel’s most delectable dishes.

Deputy Chief of Mission (DCM) Michal Ma’ayan and Cultural Attaché Limor Gadya came up with the idea and invited three young Israelis, who run a food truck (The Shuka Truck) in New York that serves Shakshuka, to come to Colombia to serve their version of the tomato-based dish.

The embassy flew The Shuka Truck’s truck to Bogota and redesigned its exterior for Independence Day. The three young Israelis parked their truck at two parks in central Bogota, the parking lot of a popular television station, a Jewish day school, and a military university. Colombians welcomed the initiative with enthusiasm and hundreds of meals were distributed. Israeli Ambassador to Colombia Marco Sermoneta and his DCM were interviewed by many television stations.

The embassy also hosted a reception in the evening and presented a video of Colombians trying The Shuka Truck’s Shakshuka. Within 48 hours, the video garnered more than 200,000 views.