Tens of millions attend the Hajj each year.
Photo: Reuters 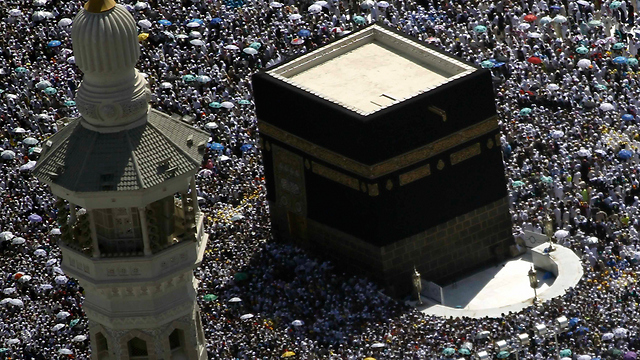 Battle of the Kaaba

The upcoming Hajj is just another event highlighting the ongoing tensions between two of the world's most important Muslim nations: Iran and Saudi Arabia.

In about a week, adjacent to the beginning of the Muslim holy month of Ramadan, "Hajj season" will start as well, and Muslims from all around the world will start their religious pilgrimage to holy sites in the Saudi cities of Mecca and Medina. At the peak of the Hajj, Saudi Arabia will host tens of millions of people at once. Those who make the pilgrimage will be able to take pride in their religious devotion upon returning home.

Wearing white, both Sunni and Shiite (mostly Sunni, though) will go aruond the Kaaba and the Black Stone together. Despite a massive police presence, disasters always occur. This is a time when security forces in Saudi Arabia experience their strongest yearly migraines, as they work around the clock to prevent attacks and infiltrations by terrorists. On one hand, it's a chance for Saudi Arabia to show off its status as the patron of sacred sites, but on the other, the danger in these large numbers is high and must be addressed.

The Kaaba area during the Hajj. The busiest time of year for Saudi security authorities. (Photo: Reuters)
Invitations for the Hajj were sent out early this year to encourage pilgrims to complete their arrangements in advance. Despite the tensions between Riyadh and Tehran following an incident that occurred in January in which Iranian protesters attacked the Saudi Embassy in Tehran (after which the Saudis cut diplomatic ties between the countries), the Iranians were invited too. An Iranian crew went to Saudi Arabia to negotiate the process of permit allotment to Iranians. The talks ended badly: The Iranian delegation returned home empty handed. The Saudis quickly sent a warning to Iran's leaders, telling them, "You will be held responsible by Allah for denying the pilgrims their right to observe this important religious decree." Tehran, on the other hand, insists that the Saudis "don’t want" its people there. The Tehran-Riyadh discomfort rises higher and higher every day. It's hard to believe, but cool-headed Switzerland is actually the one given the charge of mediating between the two. The country's embassy in Iran will be responsible for issuing electronic tickets, and its sister embassy in Riyadh will guarantee (as far as its limited abilities allow) the safety of the tens of thousands of visiting Iranians, should they arrive. About 770 Iranians were killed last year when a bridge collapsed at the entrance to Mecca, but the Iranians claim the number of casualties eventually reached 2,400. At the moment, it seems like there's a need for a strong hand to guide these two sides if they are to reach a proper compromise. Russia has influence over the upper echelons of both governments. Without Putin, the Iranians may have to stay home, and the ball will roll into Saudi King Salman's court. Tehran is already preparing a media blitz focusing on this action's negative impact on its citizens' human rights. Really, is there a bigger irony than these two nations, a couple of the top human rights violators in the world (Iran is ranked second in the world in number of executions and arbitrary arrests, with Saudi Arabia coming in third), each taking a sanctimonious stance on the issue while condemning the other?

Former Iranian President Ahmadinejad. May be in for a comeback. (Photo: AP)
The Hajj affair is another sign of the power struggle born of the Iran nuclear deal. A battle for oil rights is raging behind the scenes, and the Saudis are worried by the flow of businesspeople and industry to Iran, which they see as coming at their expense. The Iranians, on the other hand, have replaced the chairperson of the Assembly of Experts – the Ayatollah Ali Khameini's political power base. The election of new Chair Ahmad Jannati, who is associated with the ultra-conservatives in the country, spells bad news for President Hassan Rouhani and Foreign Minister Mohammad Zarif, who would rather open their country up to the wider world. Jannati is sending winking messages to his friend, former President Mahmoud Ahmadinejad, hinting to him that it might be time to start getting in front of the cameras a little more. But Jannati, who is 90 years old, may not reach the end of his eight-year term. With an elderly Jannati and an ill Khamenei, all options seem open.