Delegation member at the Western Wall 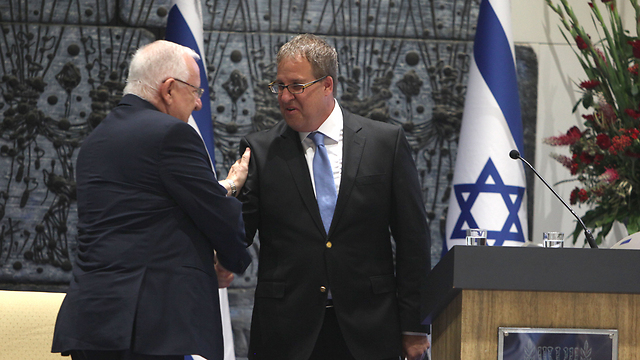 More than 100 leaders from the US LGBT Jewish community came to Israel in a first of its kind trip called "Visiting Israel with Pride." The delegation was jointly organized through the US Jewish Federation and Israeli and groups. One of the goals of the trip was to help improve the dialogue between the US and Israel - primarily amongst liberal groups, which have a tendency to be more critical of Israel.

Stuart Kurlander, the leader of the delegation, said that, "this trip is historic because it is the largest delegation of Jewish LGBT leaders to ever come to Israel, and comes at a time when discussions of discussions about the rights of the LGBT community are getting attention both in the US and in Israel."

"We feel really lucky to have been given the opportunity to have open conversations with the Israeli gay community to see how we can help each other in our struggles for equality and against discrimination," Kurlander continued.

Stuart Kurlander is a Jewish lawyer from Washington DC and former President of the Washington DC Jewish Federation. "Despite all the positive changes which have occurred over the past few years, there is still a lot of work to do to create a shared Jewish community, and more progress needs to be made in this regard," he said. He continued, "we are still dealing with human rights issues and we continue to fight for fairness and equality both in the workplace and in all other areas of life. This trip will enable us to stand with the members of the LGBT community in Israel. We will continue their fight for more rights." The delegation participated in a memorial ceremony for Shira Banki who was murdered in last year's gay pride parade in Jerusalem. They also visited the Western Wall, and had a Sabbath service while wearing rainbow colored kippas. The delegation also visited the Yad Vashem holocaust museum in Jerusalem, where they were given a lecture on the persecution of both the Jewish and non-Jewish members of the LGBT community.

Members of the LGBT delegation at the Western Wall (Photo: The Jewish Federation)
They also visited various startups in Tel Aviv and met with leading Israeli LGBT artists, businessmen, and LGBT community leaders, and learned about the struggle these face in the fight for equality and against discrimination in Israeli society. However, one of the highlights of the trip was when the delegation met with Israeli President Reuven Rivlin and US Ambassador to Israel Dan Shapiro, who hosted the delegation at their homes in Jerusalem and Tel Aviv. President Rivlin told the delegation that he had the honor of receiving the first ever LGBT delegation to the Knesset 23 years ago. He went on to say that when he was chosen to become president, he happily welcomed a similar delegation of LGBT leaders, and was proud to receive the current delegation in his home. "I know that you've met people from many different communities and saw many different and beautiful faces in this country. You saw the strength of our democracy, of duality, and of the society. You've seen this country as Jewish and democratic. It's not difficult to convince you all of the fact that there's no disparity between Israel as a Jewish state and Israel as democratic, because democracy in Israel is for every Israeli citizen," the president said. Rivlin continued, saying "in Israel today, we're dealing with many challenges which are changing the face of Israeli society. We are four equal tribes: seculars, traditionalists, Israeli Arabs, and ultra-Orthodox. Different tribes with different aspirations and different rights. They read different newspapers, live in different cities, and study in different schools. This new reality calls for a new agenda. I hope that this visit will help you to see past the news headlines and see that despite the challenges, Israel is still a lighthouse of democracy and equality in the Middle East and the world."

President Reuven Rivlin (center) with Stuart Kurlander and partner David Martin with the LGBT delegation (Photo: The Jewish Federation)
Kurlander called on President Rivlin to continue to stand with the LGBT community in Israel, to stand for equal rights, and to stand against discrimination. Another one of the heads of the delegation, Matt Nosanchuk, a high ranking advisor in the US State Department and advisor to the Whitehouse and National Security Council, said that "this trip enabled more than 100 LGBT Jewish-Americans the opportunity to discuss important issues such as religion, pluralism, co-existence and equality, and to highlight the values which we share with (the Israeli LGBT community)."

Tel Aviv Gay Pride Parade (Photo: EPA)
Dara Papo, an LGBT activist from the US West Coast said, "it's hard to support Israel in many places in the San Francisco Bay area. Despite the fact that I come from a very involved family, I've never been to Israel and never felt comfortable speaking about my support for Israel. This trip helped me to believe in Israel and the way its citizens deal with difficult issues. Through my connections in the US LGBT community and its struggle, I can genuinely say that I feel a lot closer to Israel than I did before." They ended the trip at the Gay Pride Parade in Tel Aviv on Friday.