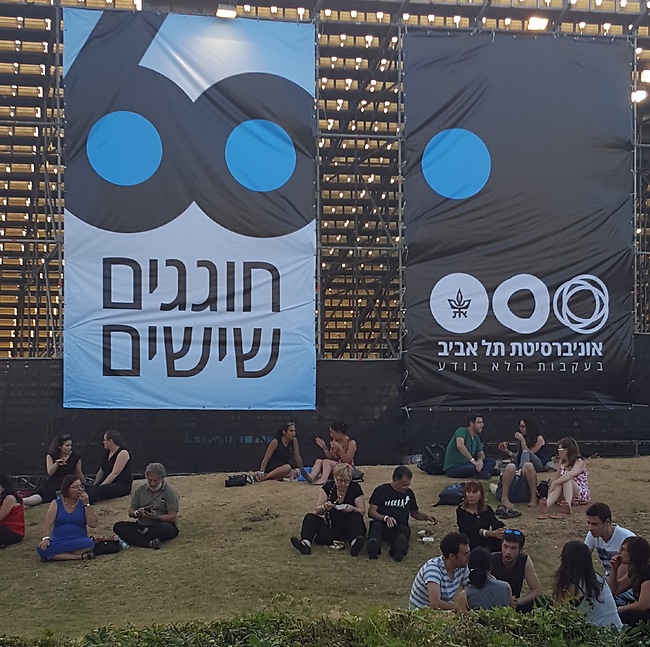 Great food, inspiring speeches, and an amazing concert were had to celebrate 60 years since the founding of Tel Aviv University

The Tel Aviv University (TAU) Alumni Organization celebrated the 60th anniversary of the founding of the university with a massive concert event attended by over 5,000 alumni.

The TAU Alumni Organization is the largest of its kind in Israel, boasting over 60,000 members, amongst them world leaders in the fields of industry, science, economics, and the social sciences. TAU counts over 170,000 people as alumni.

Notable alumni from the university include Knesset members from all across the political spectrum, former IDF chiefs of staff, Supreme Court justices, artists, actors, economists, captains of industry, and even Israel's first astronaut.

The event began at Jacob Square on the university quadrangle where attendees were treated to gourmet hamburgers, goose breast hotdogs, and all manner of coffees and pastries. There was also an open bar sponsored by 647 Bar Experience, with Weihenstephan beer and various Israeli wines on offer.

Some of the food on offer (Photo: Eitan Goldstein)

The gates finally opened,  and those in attendance filed into the stadium which had been set up for the concert. Several notable speakers spoke at the event, including President of TAU Yosef Clapter.

He said during his speech that "together, we constitute a huge force with which to lead not only Israel but the whole world in a meaningful way. The TAU Alumni Organization was established to keep and develop the special connections formed between the alumni. It aims to strengthen the relationship with the community and create a place for mutual growth."

TAU President Professor Yosef Klaptor with Sigal Eder, Head of the Friends of TAU Associatin (Photo: TAU Alumni Association)
Following his speech, Sigal Ader, Chairwoman of the Friends of TAU Organization and one of the initiators of the TAU Alumni Organization spoke. She said in her speech that "the TAU Alumni Organization is a lot more than its name, it is a wide ranging system of bonds of friendship whose goal is to improve the lives of all. It is an organization which works not only for itself, but also has the power, the skills, and the ability to work for the benefit of others."

The chairwoman of the Organization , Sigalit Ben Hayoun, then gave her speech. In it, she said that "we are proud that TAU that the university has decided to celebrate its 60th birthday with this major event for the university's alumni and families. The Alumni Association was established a year ago, and was only in touch with about 20,000 alumni. We've since tripled our numbers and are now in communication with over 60,000."

Finally, TAU alumnus and Israel Prize recipient, Gen. (ret.) Doron Almog took the stage. He said in his speech "I would like to raise two flags tonight; the flag of personal excellence and the flag of social excellence. I often ask myself if the ivory tower can turn into a lighthouse for society. I call on TAU to take more steps towards social giving. I believe that this can positively affect Israeli society, and strengthen the whole of society."

After these moving and powerful speeches, it was finally time for the main performance to begin.

Shalom Hanoch, considered to be the father of Israeli rock, came out onstage with his entire big band. Despite the fact that he is pushing 70 years of age, he performed with the spirit and energy of a performer 40 years younger. The happiness, energy, and enthusiasm he clearly had while performing on the TAU stage was felt by all in attendance, and continued throughout the concert. Despite the fact that he perfromed for almost three hours straight, he seemed to have no sign of weariness, and could have gone on all night.

After performing some of his most famous songs, he invited Ninet Tayeb onto the stage. It was evident from the beginning that the two were in sync with each other, with Tayeb's vocals perfectly accompanying Hanoch's amazing rock skills and guitar riffs, and her energy only adding and dovetailing with Hanoch's on stage. With Tayeb's powerful vocal performance alongside Hanoch's incredible musical talent, the experience turned almost religious in nature.

Finally, Aviv Gefen took the stage with Hanoch for a truly rocking experience. Gefen's beautiful voice complimented Hanoch's musical talents to provide a unique experience for the attendee. By the time Gefen took the stage, the majority of the concert goers had left the bleachers and swarmed the stage to get as close as possible to these incredible musicians.

With great food, inspirational speeches, and an amazing concert, it is clear that the TAU Alumni Organization will have a positive impact on all of those who are associated with it, and will continue to be a light for all of Israeli society.