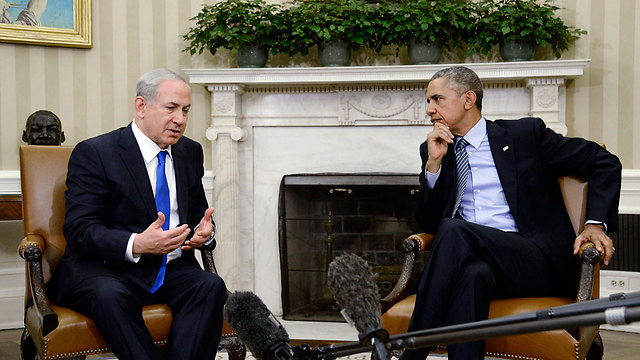 In response to letter to Congress expressing President Obama's objection to increasing Israel's missile defense aid, PMO says Netanyahu working to anchor supplement as part of discussions on American military aid to the IDF, criticizes 'attempt to turn the dialogue with the US into a domestic Israeli political tool' and assures 'expressions of panic are not warranted.'

The Prime Minister's Office rejected Wednesday reports that US military aid to Israel will be cut following a letter sent from the White House to Congress expressing President Barack Obama's objection to further increase the missile defense aid.

In a statement released on Wednesday afternoon, the PMO stressed that "there has been no cut in American assistance."

“There is an internal debate between Congress and the White House on the size of the annual supplement to the missile defense program,” the PMO stated.

“Prime Minister Netanyahu is working to anchor this supplement as part of the discussions on the assistance agreement for the next ten years. Not only will security assistance for missile defense not be cut, it will be increased. The attempt to turn the dialogue with the US into a domestic Israeli political tool is improper; expressions of panic are not warranted,” concluded the PMO's statement.

The White House’s declaration came in a letter Tuesday to Congress dealing with an Israeli request to increase funding for missile defense systems in the Jewish state.

The letter to congress was six pages long and was sent following a congressional decision to increase Israeli military aid, and against the backdrop of tensions between the Obama administration and Prime Minister Benjamin Netanyahu on a new and multi-year aid package.

The letter said that Obama's advisors may recommend that the president use his veto power if Congress passes the aid package increase.

The Israeli request for funding missile defense systems is an integral part of the multi-year aid request. It would mean the addition of several million dollars in aid every year, and would be incorporated into the $40 billion in aid Israel would like to receive from the US over the course of the next decade. Israel has received several hundred million dollars worth of aid in order to fund the Iron Dome, Magic Wand, and Arrow 3 missile defense systems from the US congress. In fact, Congress approved an additional $600 million for these systems in 2015, a figure much higher than the initial $150 million which the Obama administration initially wanted to give.

This aid is not part of the MOU framework between the two countries which is due to end in two years, and Israel is requesting that this aid become part of that framework.