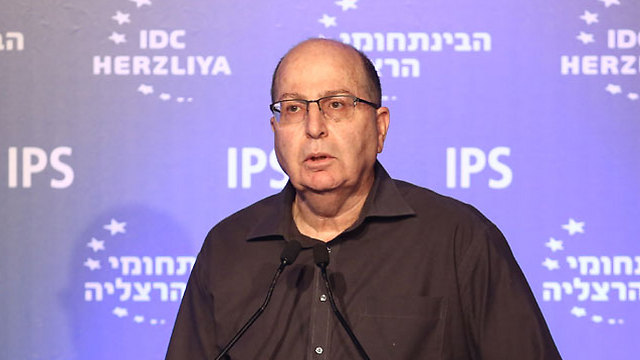 Ya'alon says plans to run for prime minister in next election

Former defense minister levels harsh criticism against current government, saying it uses scare tactics and incitement to 'divide and rule'; 'The leadership in the State of Israel should stop scaring civilians and stop giving them the feeling we are facing a second Holocaust,' he adds.

Former defense minister Moshe Ya'alon leveled harsh criticism against the government on Thursday, once again expressing his plans to run for prime minister in the next elections. "Last month I resigned from my position as defense minister and Knesset member, and made it clear that I would return to public service. I intend to run for the leadership of Israel in the next elections," Ya'alon said at the Herzliya conference. Ya'alon asserted that "The leadership in the State of Israel should stop scaring civilians and giving them the feeling that we are on the brink of a second Holocaust."

Former defense minister Ya'alon (Photo: Adi Cohen Tzadok)
Ya'alon resigned his post as defense minister and announced he was taking a break from politics after realizing Prime Minister Benjamin Netanyahu was planning to replace him with Avigdor Lieberman, who joined the coalition with his five-member party and rewarded for it with two ministries, among other things. Ya'alon said at the time he was resigning after having lost trust in the prime minister. "If there is something that keeps me up at night and causes me to be anxious for the future of Israel, it's not the arms transports making their way from Lebanon," Ya'alon said. "It's the fractures being created in Israeli society, the systematic erosion of the quality of life." He said he received "thousands of calls from Israeli citizens from across the political spectrum—and certainly from members of Likud all across the country—which clarified to me that there is a desire for change, and that the State of Israel needs change." "The State of Israel and its citizens," he went on to say, "deserve a stately leadership that stops cynically zigzagging (on its position) every other day. We deserve a leadership that doesn't choose (to rule through) the corrupt system of divide and rule." "I can't stand the fact that the leadership in Israel of 2016 is busy fanning the flames, inciting, intimidating and dividing Jews and Arabs, the right and left wings, and different sectors of society. It does all of this just to survive, stay in government for another month or another year," Ya'alon continued.

"We needed a stately leadership that doesn't allow anyone to threaten Israeli judges and the Supreme Court. We could argue and disagree over judicial activism—but we must fight any attempt to hurt the rule of law," he added.

"We need a leadership that does not seek to enslave the media for its own survival purposes," Ya'alon said. "The media in Israel has to remain unthreatened and free, it should enable everyone to voice their opinion without fear."

"We are currently at a historical juncture in which we should each ask ourselves what kind of country do we want to live in, and what kind of country do we want our children and grandchildren to grow up in," Ya'alon continued. "We must not give up, or tell ourselves that someone else would deal with these issues. And that is why I'm planning to present an alternative to the current leadership, because we have no other home."

He also asserted that Israel is not facing an existential threat. "The State of Israel is the strongest in the region. I can confidently say that at this time and in the foreseeable future there is no existential threat to the state of Israel," he said. "I say this as someone who knows every last detail of the security situation in Israel, and who knows the power and strength of the IDF and its intelligence capabilities."

"The Iranian nuclear project likewise does not pose an immediate threat to Israel and the countries in the region," Ya’alon further charged, although he added that "the Iranian regime continues to be the number one destabilizing factor in the Middle East and the entire world."

Despite these assessments, he said Israel should know how to defend itself, "In the Middle East, there is no knowing what is going to happen and who is going to decide to try and challenge us. The events of the past week further prove that the war on terror is an international one."